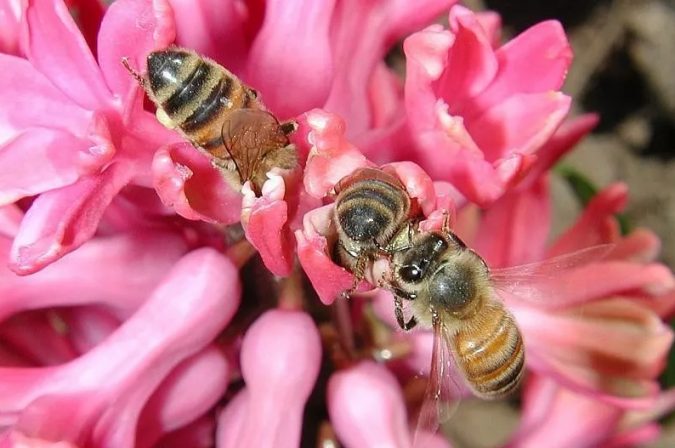 Hyacinth (not water hyacinth, which is another plant) is a multi-year bulbous plant with an oval bulb shaped like garlic. It is native to the Mediterranean coast and Asia. It likes a sunny and humid growing environment, which requires good drainage and fertile sandy soil. Hyacinth contains alkaloids, which can be poisonous if consumed in large quantities. Bulbs are the most toxic part and should not be consumed.

All photos were taken in the morning of March 26, 2002, Beijing Botanical Garden. Perhaps I saw more bees on flowers here because about 30 colonies were closeby. Camera was Nikon Coolpix 990 (3.2 megapixels, point and shoot camera, not digital SLR). You see, You can take beautiful photos without a DSLR. Of course, it is more difficult to photo a bee, especially in flight. I have hardly seen bees foraging on it in the United States. So it may not be a very important source of honey for bees.

1. Red hyacinth, the honey bee had pollen in her baskets. The bee is not quite in focus. 2. There should also be a little nectar, you can see that from her foraging  behavior. 4. As mentioned, the camera was a point and shoot one. Press the shutter, and the photo wont be shot unti after 0.6 seconds (shutter delay). Because the time lag was too long, and honey bees flew quickly, this camera had a hard time capturing the bees. So at one point I gave up to shoot a flying bee, so I just randomly pressed the shutter. Bingo, I got one bee in flight! 5. I got lucky twice that day. 6. The above photo must be a cropped version of this one, with two bees in flight. Both had frozen wings, which is not as good as the “windmill” effect (with wings in motion). 7. There were also purple colored flowers.