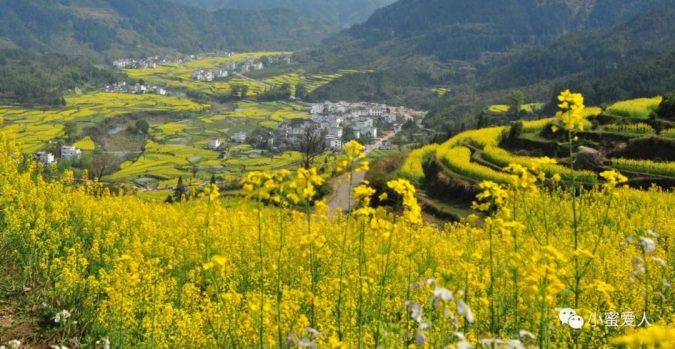 Canada’s canola (rapeseed that is improved by breeding to reduce erucic acid and glucosinolate) has a planted area of ​​23 million acres (= 140 million acres), which should be larger than China. The area planted in China in 1990 was 5 million acres.

In the Peace River region (Alberta, Canada), canola can produce 200 pounds of honey per colony,  because in the summer the daytime is long, and the flowers are everywhere. I thought pollination might be free since the honey production is high, but I googled and found that canola pollination prices are “$125-$160 per colony” .  According to old data from the United States (before the 1970s), rapeseed yield is increased by 25-30% after pollination. In recent years, China has conducted experiments around the country to see the economic benefits of rapeseed after bee pollination.

Canola honey is characterized by rapid crystallization because of its high glucose content. My suggestion to beekeepers in China and in Bangladesh was to have controlled crystallization to make cream honey: one would add fine crystals (creamed honey) as crystallization nuclei (about 10%) and control the crystallization at low temperature (about 10 degrees C) so that the product is consistent and tastes good. Naturally crystallized rapeseed honey has coarse crystals and causes stinging on the  tongue.

Photos were taken April 5 and 6, 2012. Thank you, Professor Zhijiang Zeng of Jiangxi Agricultural University, and his wife for accompanying me all the way to Wuyuan, Jiangxi. Wuyuan is known for its rapeseed flowers and attracts millions of people each year (2.37 million in 2018).   We missed the peak and saw only a few honey bees so I did not make an effort to shoot macro of bees on the rapeseed (It is not clear if it is the same species as our canola here).

1. 远觅春踪婺源行，花黄一片满地金。[Chinese couplet I wrote]
I seek the steps of spring from afar, I arrive at Wuyuan where fields are golden. 3. These canola flowers have slightly passed their prime.

4. Wuyuan’s houses are with white walls and black roof, and special eaves. 5. Chinese milkvetch, a legume that is grown as a fertilizer (if fixes nitrogen). I used eat tender shoots of this plant when I was young. The only memory I have about honey bees was when a beekeeper was keeping bees during the bloom of this plant. A childhood friend of mine (Yuping Wang) was catching each bee, squeeze them for their nectar crop and eating it. One bee stung his lips and I saw his lips as a balloon when we were watching a movie in an open place (no theater at that time). He mentioned how honey was spun out but I went there to check the next day and the beekeeper was gone.  So I had not eaten honey nor seen honey bees until the year before I came to Canada (1983), when I was stayed at the Institute of Apicultural Research in Beijing during 1982. 6. Using the purple flowers as the foreground.

7. Managed to have shot an Apis cerana foraging on the milkvetch. 9. We visited the town, which has a small river. 10. The river flows outside the village to the fields. 12. Of course, as beekeepers always do, we must visit local beekeepers to learn how they keep their bees. 13. It seems that beekeepers all over the world have this hobby: not only taking a look at the hives, but also must look inside at the bees… 14. The products were sold off the road: the sign says: pure honey, fresh royal jelly and bee pollen.