Lotus (Nelumbo), which many people confuses with water lily, is actually now in a different family (Nelumbonaceae). Water lily belongs to family Nympheaceae and has about 70 species. Lotus has only two species Nelumbo lutea and Nelumbo nucifera. Lotus has a disc like receptacle in the center with individual stigmas and their leaves and flowers are usually above water, while water lily leaves and flowers float on the water (not above). Lotus produces edible seeds (lianzi莲子) and roots (ou藕). I have seen bees foraging on both plants.

I tried to find lotus blooming at the Novi MSU Tollgate facility but could not find the patch of lotus which I saw many years ago. Luckily I saw lotus again during my recent trip to China. I gave a keynote talk in Xinjiang and then flew to Fuzhou, where the world’s only college specializing on honey bees resides (College of Honey Bee Science, Fujian Agriculture and Forestry University).

The photos here are probably Nelumbo nucifera, while N. lutea is a North American species with white or yellow flowers. But they can form hybrids. So the first dozen might be a hybrid since they are not as red.

I arrived the night of July 31st around 2 am. Aug 2nd I decided to try to take some bee shots, knowing that bees might forage on these flowers. It was a cloudy day and started raining a bit around 8:30 am.

1. A blossom ready to bloom. 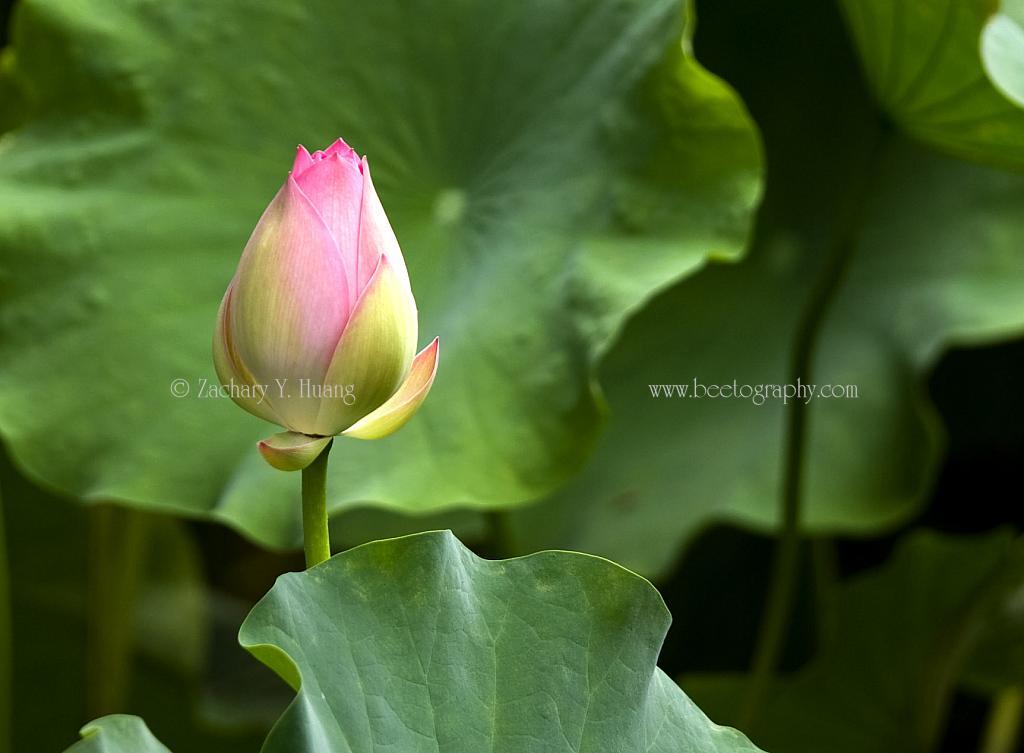 2. Just opened. Now you see the milky colored stamens (male part containing pollen) surrounding the yellow disc (female part). Each nipple like structure in the disc is a stigma, which will produce one seed. 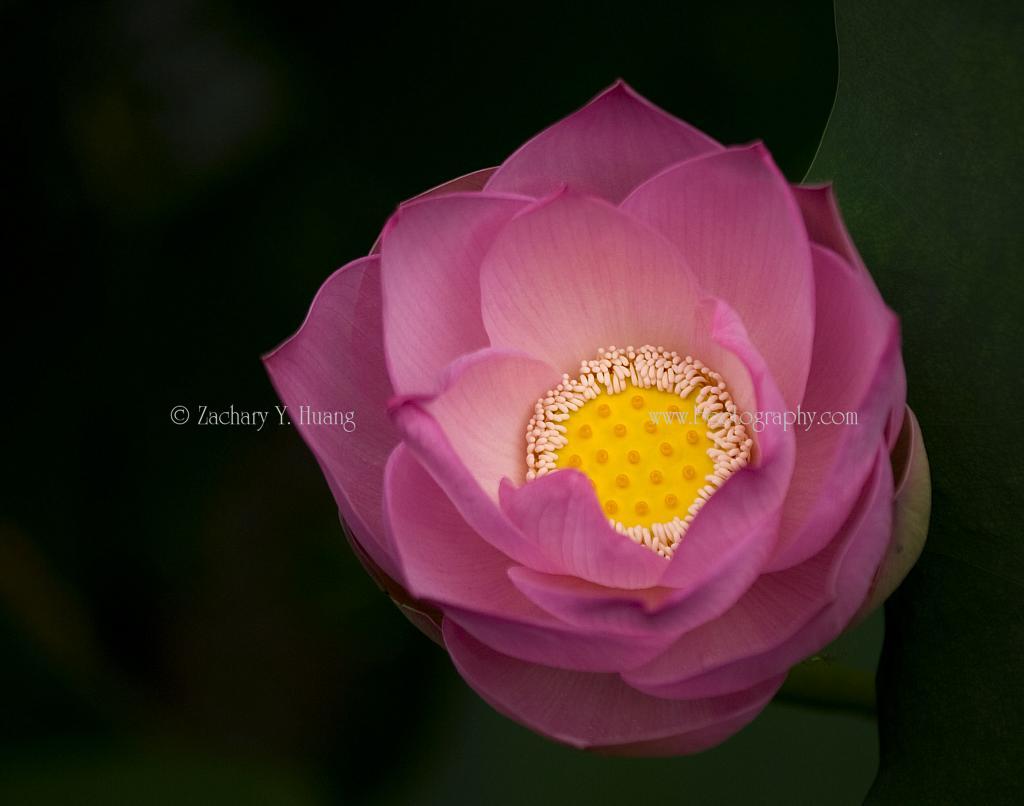 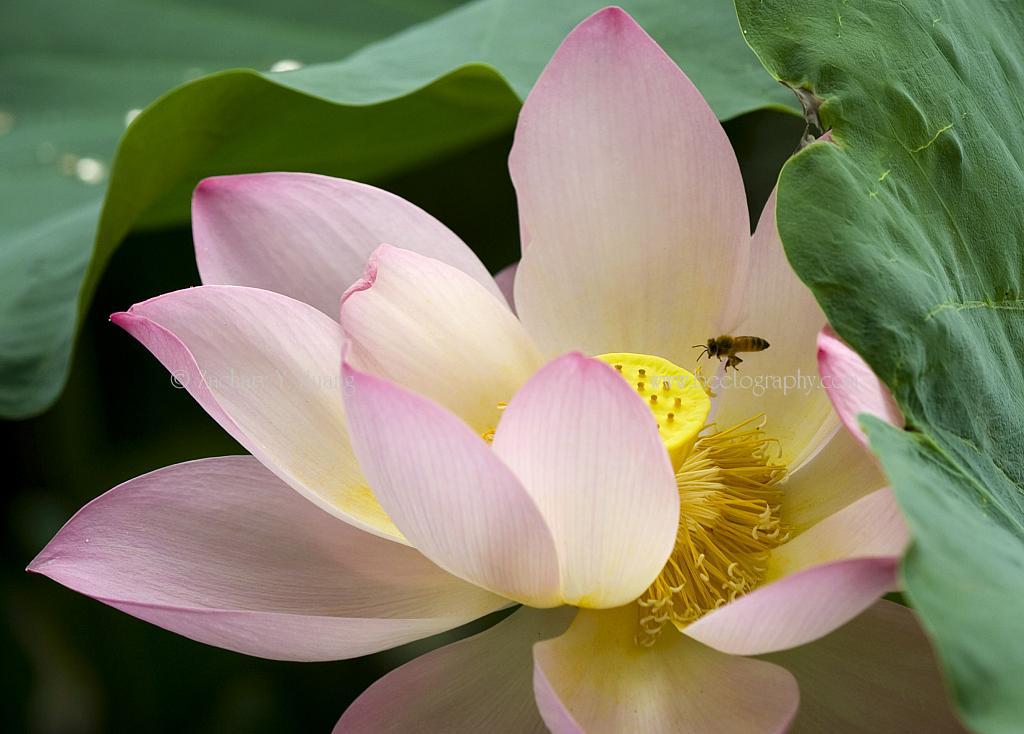 4. She is covered with pollen and has a load on her pollen basket. 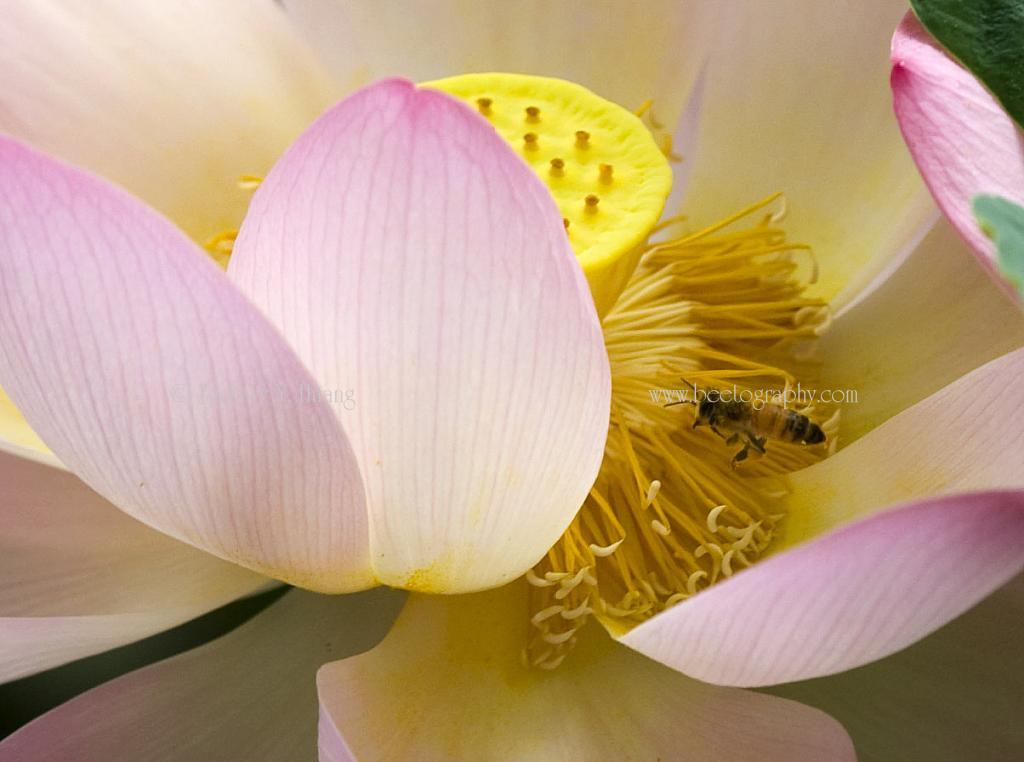 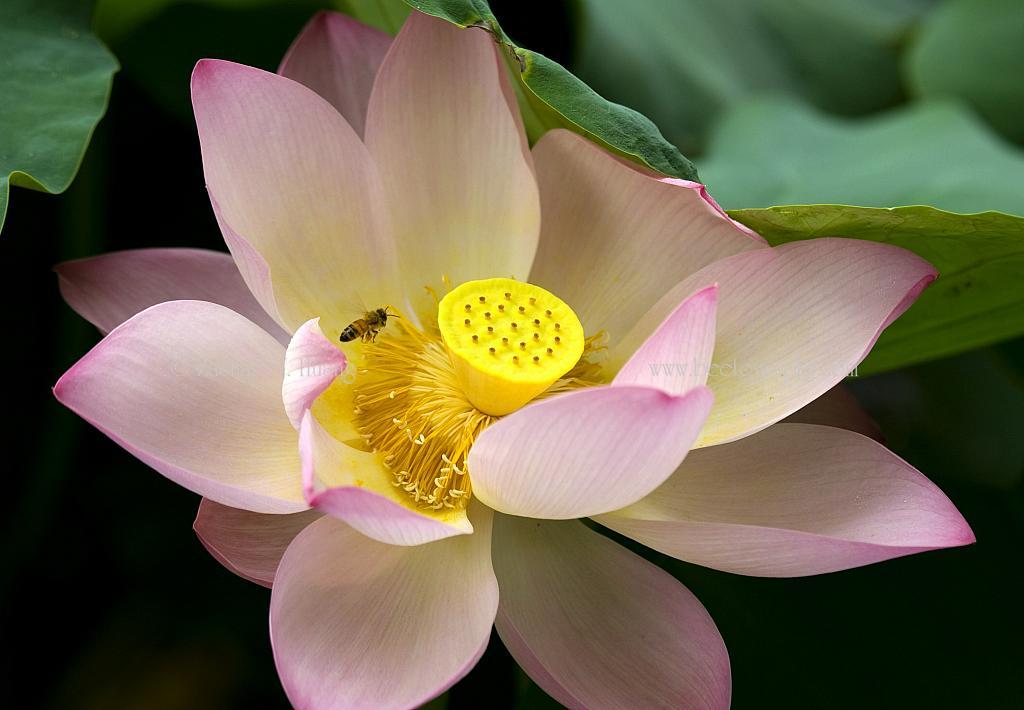 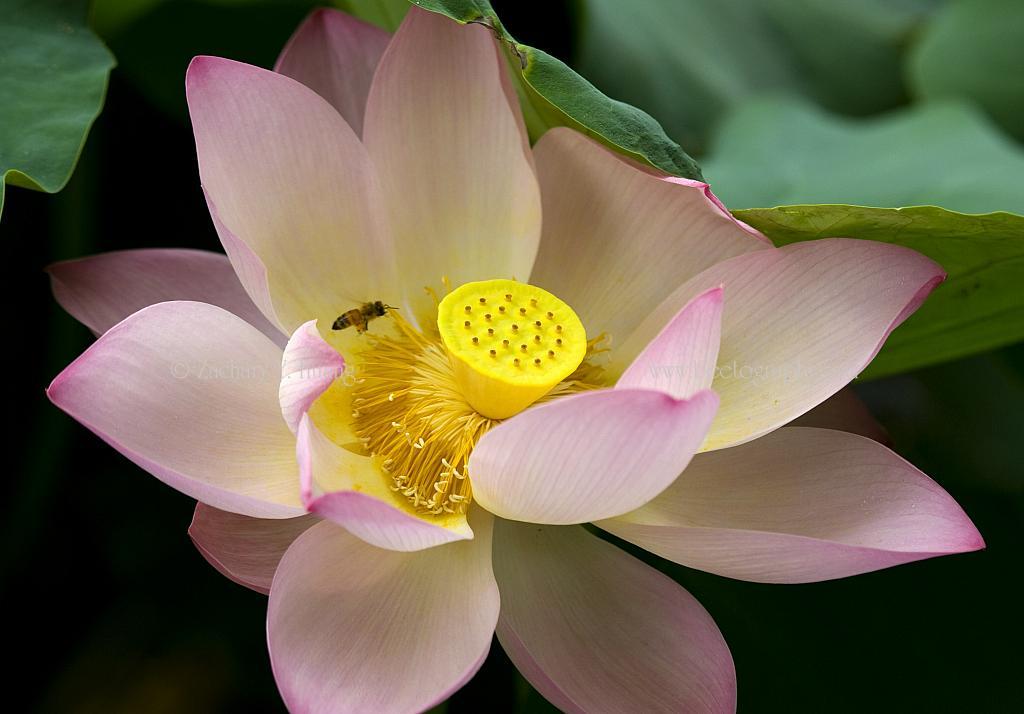 7. Double crossing. Many wasps (Vespa) patrol the flowers and try to catch foraging honey bees. This one waits at the flower. There are several species of wasps in Asia and Europe that are quite detrimental to honey bees (especially A. mellifera). I was told 3-4 wasps can wipe out an entire colony in a few days. The locals call them “tiger headed wasps” (虎头蜂）。 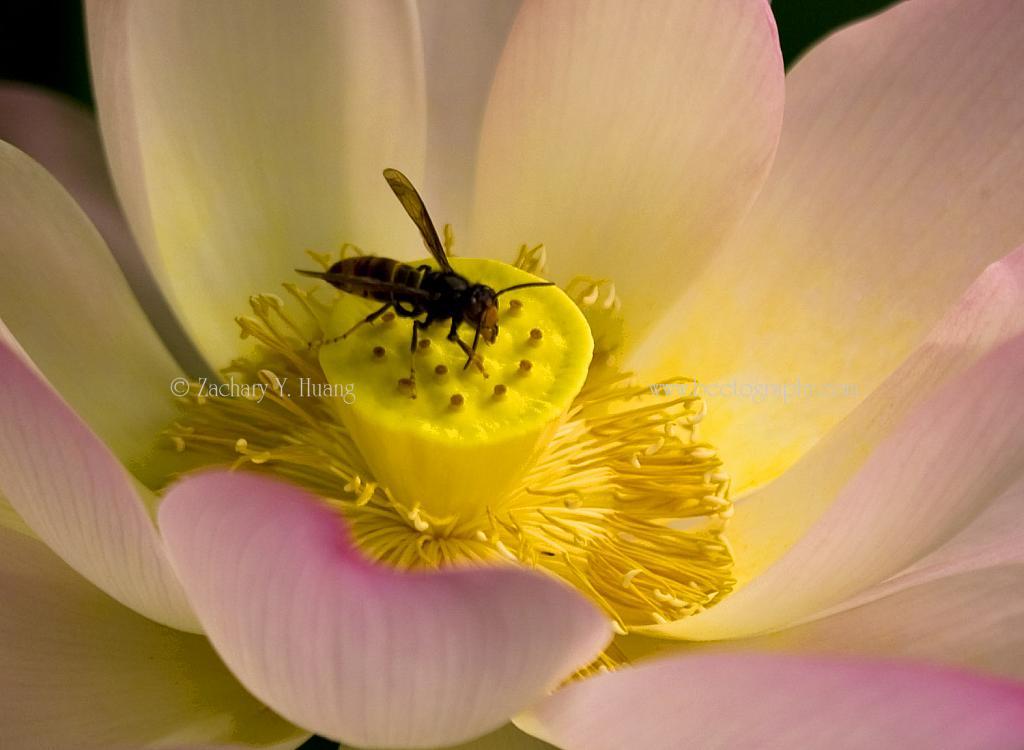 8. The wasps either is trying to hide in the flower, or more likely, trying to get some nectar to supplement energy. 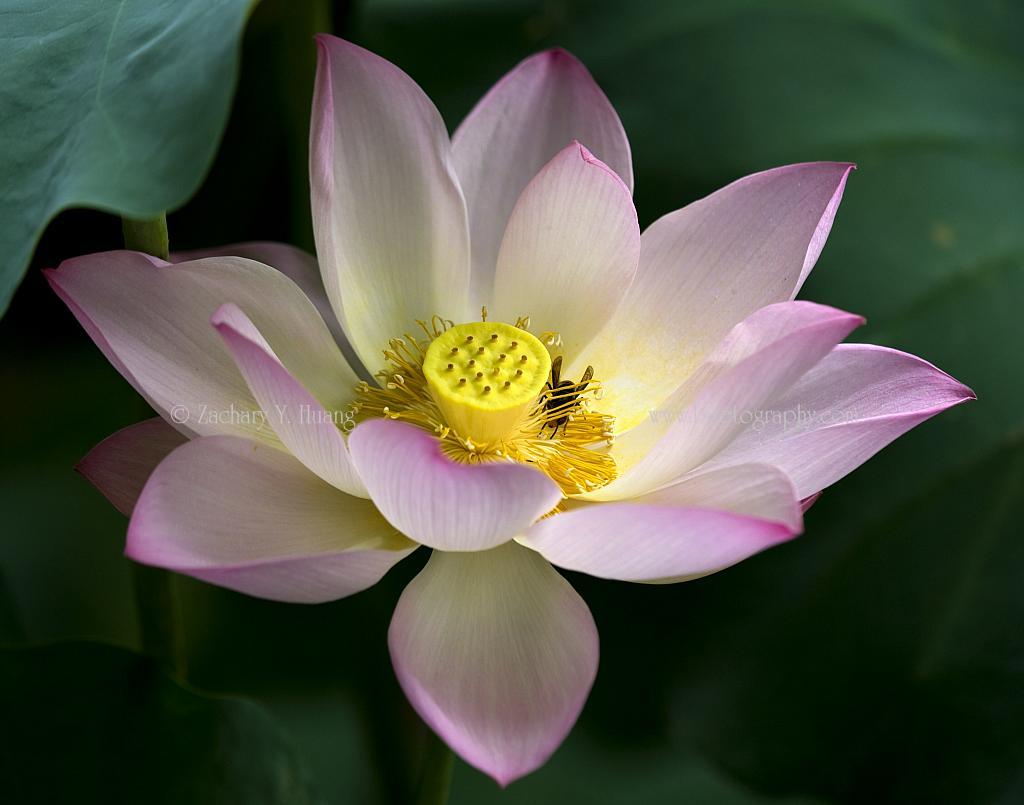 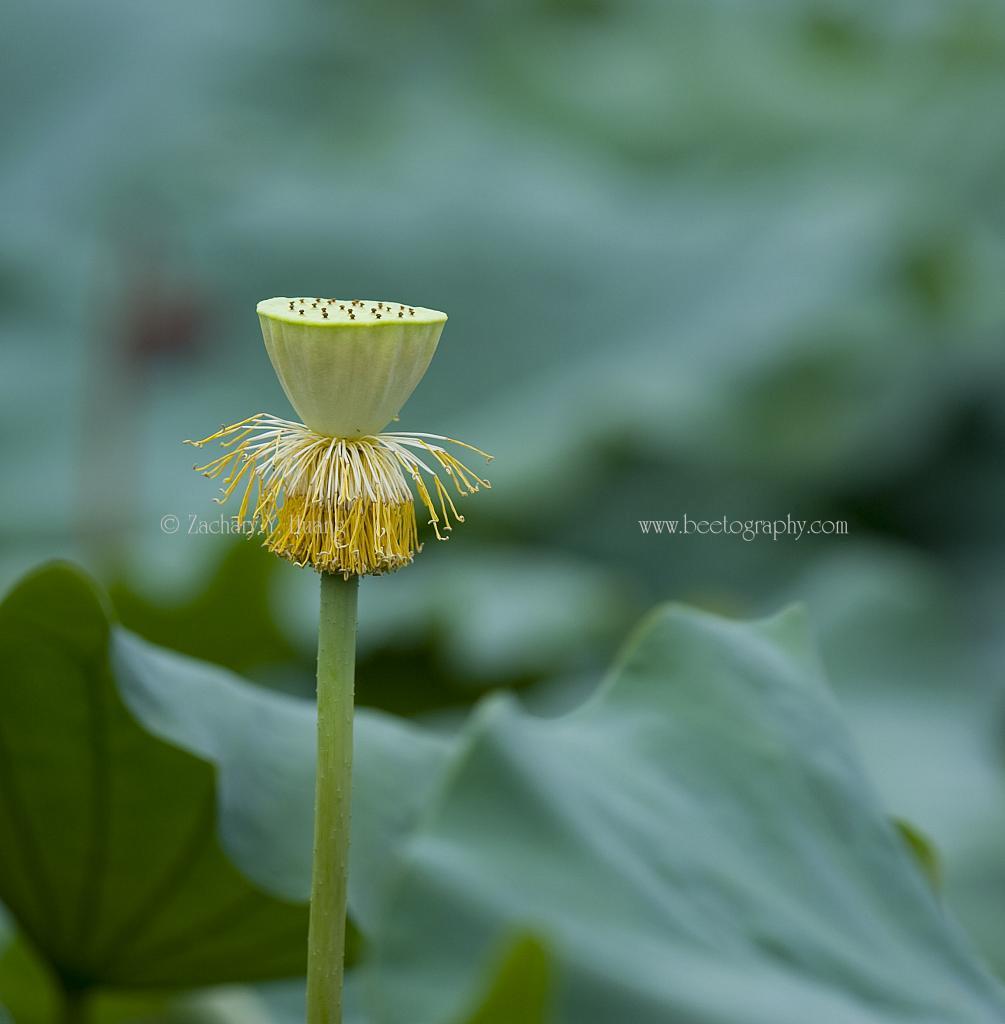 10. Now the stigma become dark and each would have a seed beneath. 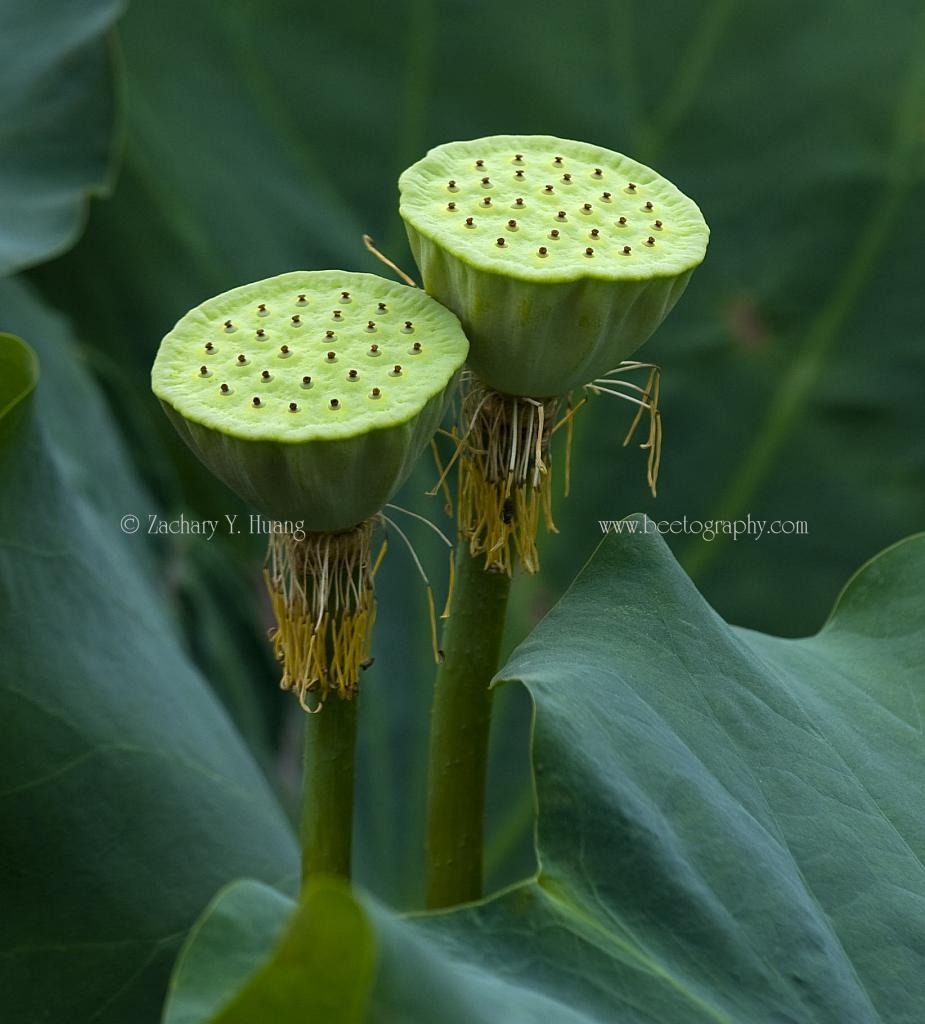 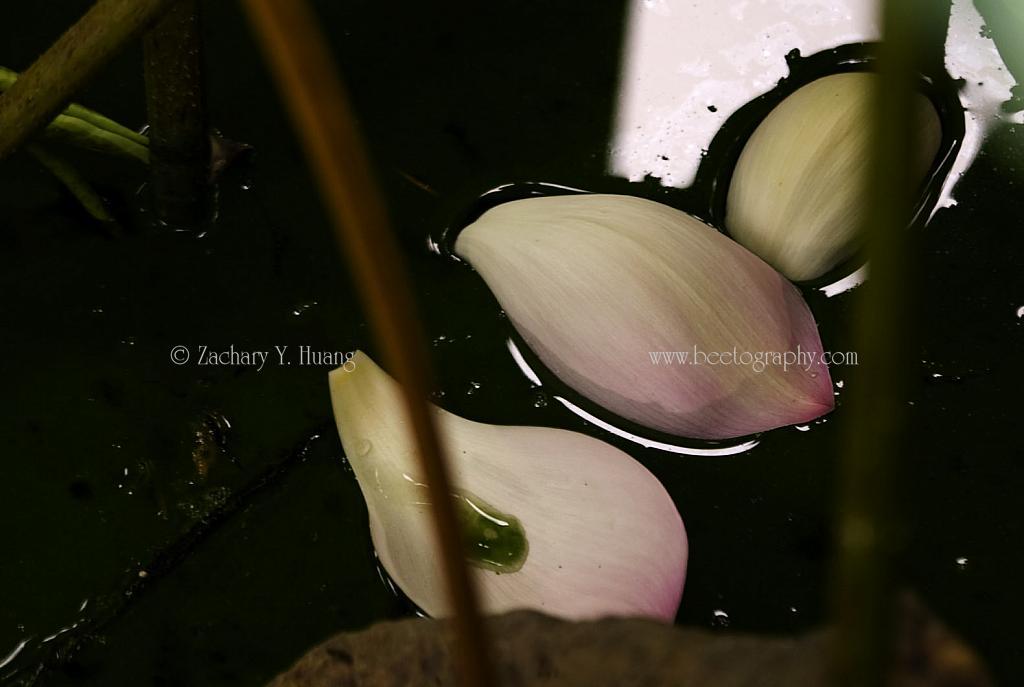 12. I imagine the birds have got the seeds. Later I saw a few people using nets to collect these, and they sell these as food when the seeds are still young and sweet. 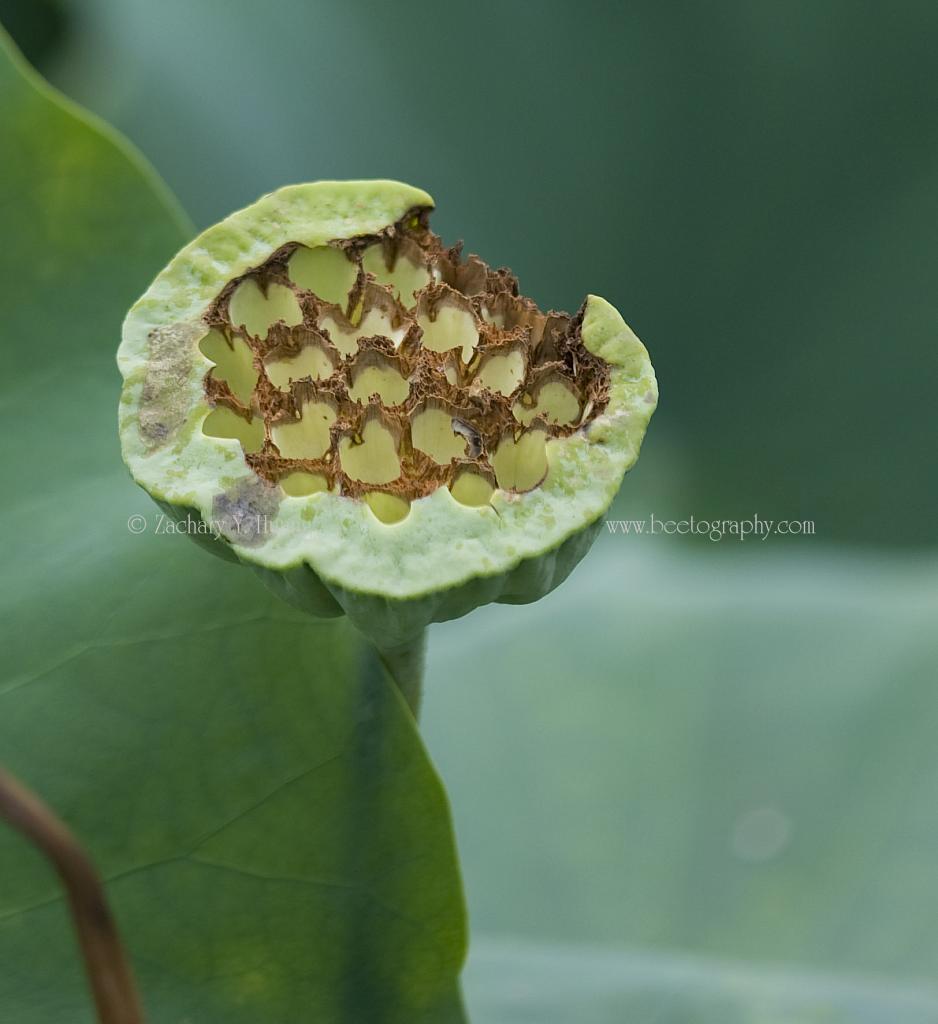 The next day (Aug 3rd) I realized that the other side of the pond had more flowers…they have white ones and red ones. about 2 times larger too. I tried to shoot more Aug 4th around 7 am, but it appears bees were slowing down around 7:20. I wanted to get that special one with 10-20 bees on one single flower! But I was leaving Aug 5th around 6 am for my 8 am flight. so this means I had to get up at 5 am next day, which I did. It was still dark at 5 am. I waited till 5:30 and did 30 min shooting and got many shots with bees swarming on single flowers. 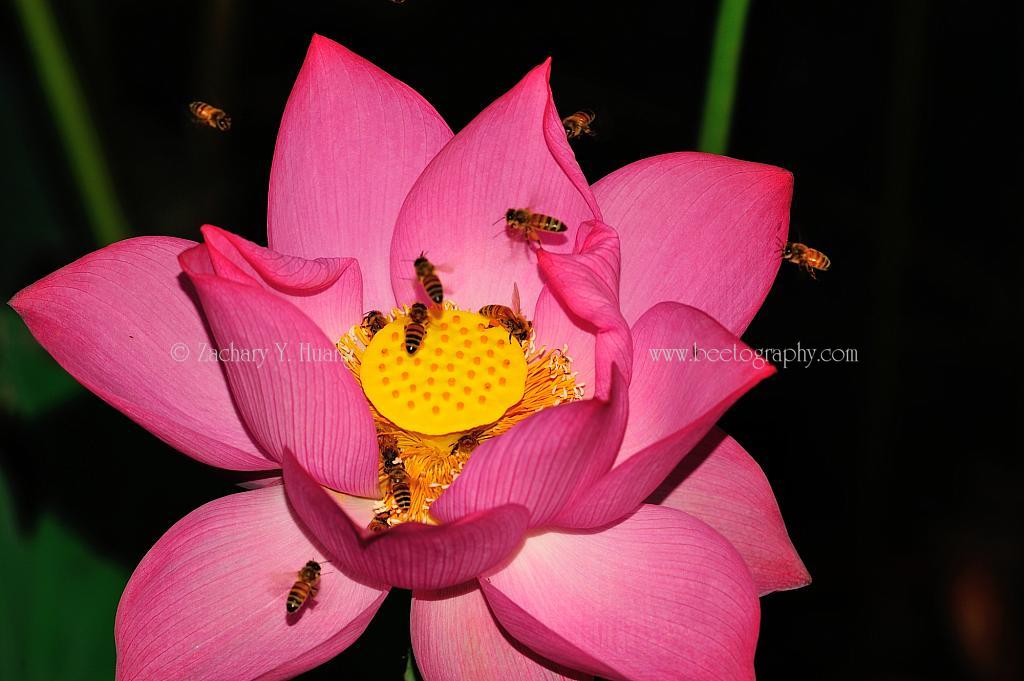 14. The same flower. Judging from their behavior (some bees were trying to bury their heads and body near the bottom of the yellow disc), bees were getting some nectar too. But perhaps not enough to produce lotus honey. But in China they sell lotus pollen, harvested from bees foraging on this plan. 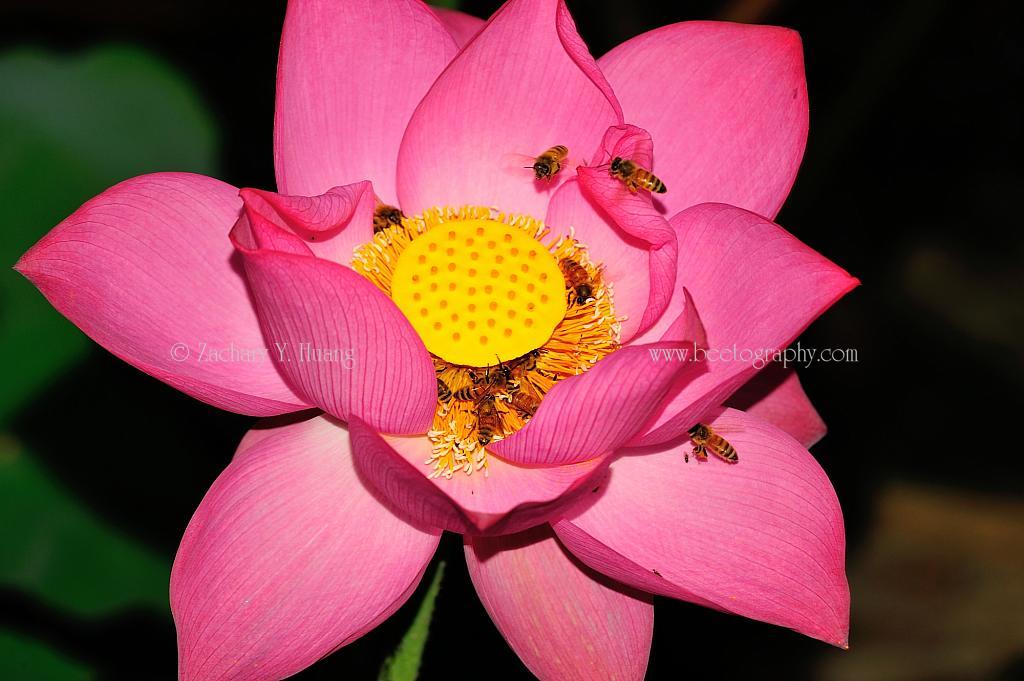 15. I saw many wasps catching bees, and finally got this one showing a wasp catching a bee. I saw only two Asian honey bees (Apis cerana) foraging on these flowers, but 99% are A. mellifera. This could be due to the fact that there were many mellifera colonies than cerana ones there. Or it could be A. cerana does not prefer this plant. 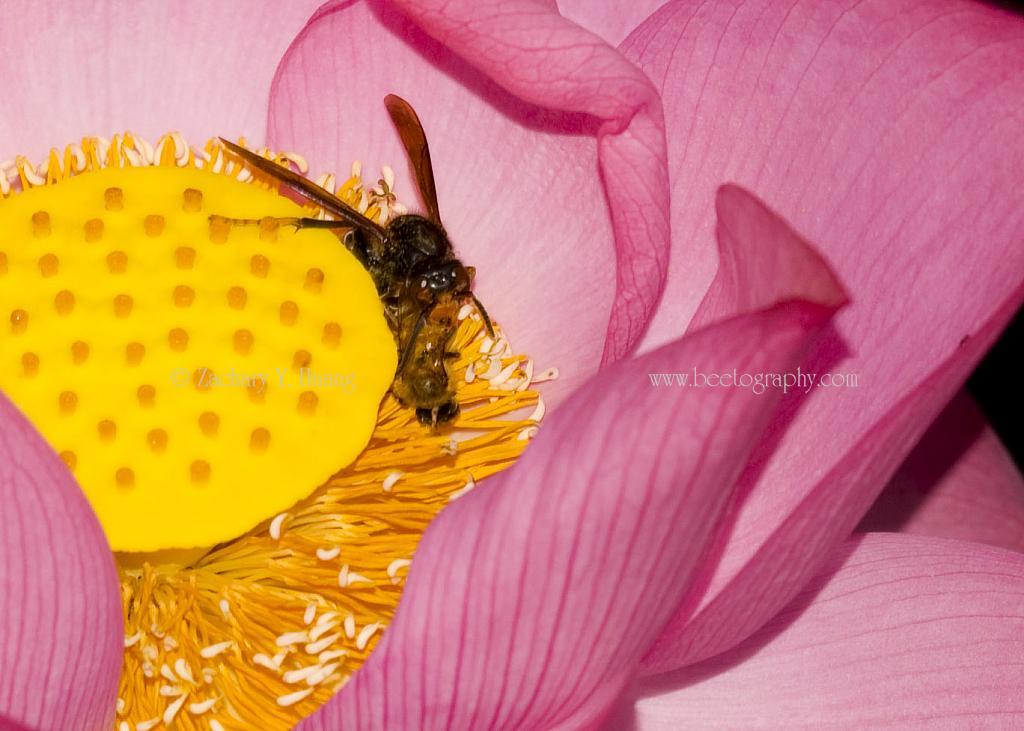 2 thoughts on “Bees foraging on lotus”