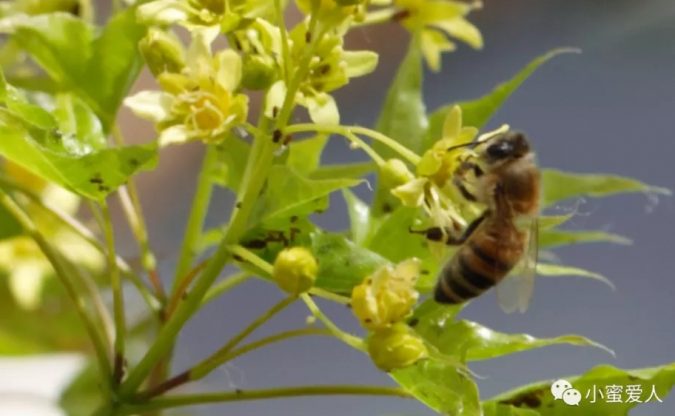 Maple trees are tall trees that can reach more than 29 meters in height and a crown of 16 meters. The flowering period is from March to April.

There are many types of maples in Michigan. The most common are the red maple and the silver maple. The red maple leaves turn red in autumn. Sugar maple, red maple, and black maple can be used to produce maple syrup, which is more expensive than honey. Because it is made from liquid from tree trunk, with a very low sugar content 4-6%. Thus it is necessary to burn wood in the snow and evaporate 40-60 times of the water volume to obtain maple syrup. Maple trees in Michigan are similar to those in Canada, so these two places are great places to see autumn leaves.

1. Some maple trees are very tall, what you see is like this. The red flowers wont show well against the bright blue sky. This is the female tree of red maple (Acer rubrum). We’re almost done here now. 2. In fact, it looks very pretty when looked at close distance. This is the female flower of red maple. Red maple is a strange plant, it is polygamo-dioecious meaning there are female trees, male trees, and bisexual trees (hermaphrodites). 3. Picked some flowers to see that they are indeed female. Those Y-shaped things are stigmas. 4. The red maple’s female flower has a solitary bee on it, which I guess is a halictid. I waited under the tree for two hours, hoping to see a honey bee foraging. but. Some tall trees were full of bees, but it was not clear if they are honey bees. most years it is still quite cold or changing (fluctuating between 50 to 65 F) so bees do not get a crop.  One year it was warm in March (I happened to be in China), and many beekeepers said they tasted the maple honey for the first time. So you could have a honey flow from maples! 5. Silver Maple ( Acer saccharinum) is also polygamo-dioecious. Below, you can see the red pistil, and the white long anthers. 6. A different tree, with all male flowers only. 7.  Acer negundo. The leaves of this maple are more special (like the leaves of an ash tree), so the common name is boxelder. 8. I was lucky to see bees on this plant in Jilin in 2012 (thanks to Xue Yunbo, the director of Jilin Bee Institute). It was quite far away and I used my 180 mm macro. 9. It was a windy day and most bees were hovering in the air in my photos.  They seemed to be collecting pollen. 11. I recently photographed a bee foraging on a maple tree in Beijing. It was identified as  Acer pictum. (Thanks to Liao Hong for identification, Beijing Institute of Botany). 12. One year I was traveling to New Waygo to work on mites and saw the red maples blooming.