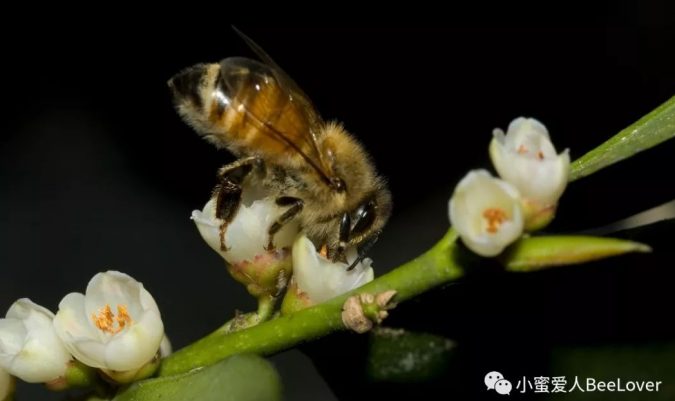 Eurya, also known as wild osmanthus, is a genus of Pentaphylacaceae (formerly Theaceae). It is an evergreen shrub, generally half to one person tall (but I was told some can be trees about 2-3 person’s height). There are more than 80 species in China, mainly in the Yangtze River Basin and hilly mountains in the southern provinces. In Hunan and Jiangxi, they are widely distributed. I have photographed Eurya in Hunan and Zhejiang. It usually blooms from January to February. Those blooming in winter (Oct to Jan) are called winter Eurya and those blooming in early spring (around February) is called spring Eurya. The flowering period of Eurya is 10-14 days, and the best honey-producing temperature is 14-20°C. Because the Asian honey bee Apis cerana can forage at lower temperatures (12°C vs 16°C of A. mellifera), most Eurya honey is produced by A. cerana. I heard that Eurya honey is very fragrant, very hard to get. I once found it in the store and it was fermented. So I haven’t tasted Eurya honey yet.

1. Flowers of Eurya acuminata. As one can see, these are all male flowers with yellowish anthers. 2. An Apis cerana is collecting pollen on the male flower. 3. Western honey bee (Apis mellifera) foraging male flowers (Zhejiang, looks like the same species as the Eurya in Hunan above)。 4. These are female flowers. You can see the pink stigma that is bifid (occasionally trifid). Both sexes of flowers have a lot of nectar. 5. An A. cerana foraging for nectar from female flowers. 7. Another A. cerana on female flowers. 8. A. cerana photographed on October 1, 2011, Fuzhou, Fujian, China.  I thought it was a type of Eurya, but it is actually Symplocos congesta (Symplocaceae).  Bees flew fast so I did not have any good shots. 9. The flowers themselves are also quite beautiful.