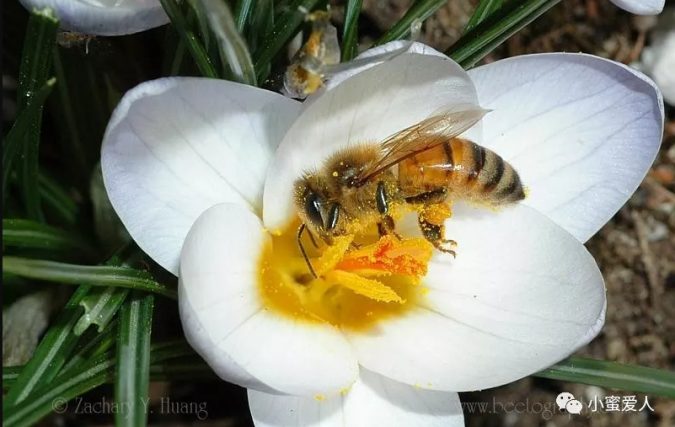 Crocus flowers is common in the Midwestern United States, but it is not wild. It is cultivated in home gardens. Bees love their pollen. They bloom in Michigan in March and April, a little later than the Aconite. It was not endemic in North America but introduced from Europe.

Saffron, which is quite expensive, is the pistil of another sister species, Crocus sativus. There are only two to three pistils per flower.

1. There are many varieties, some are white. You have to admit that even without bees, this flower is also beautiful, pure and fresh. It can bring you the first warmth in the cold air. 3. She turned upside down. 4. The picture below made to the cover of Bee Culture (American Bee Culture Magazine) in March 2013. 5. This photo was used as the cover of the American Bee Magazine in July 2007. This photo is also the one I sold the most as a print. The bee could not wait, before the flowers were fully bloomed, climbed in and together with the yellow color inside and the white petals outside, formed a “bee egg”.  I named the print “Hatching Out”. 6. There are also flowers with stripes. 7. There are also purple flowers. 9. This should be a halictid bee, a solitary bee which nests in soil. 10. 11. Although they looked so different to us, the white ones and ones with purple stripes are basically the same under ultraviolet light. The next two pictures on the right are taken in ultraviolet (infrared and visible light are removed). Shooting this required a modified digital camera. 13. The saffron C. sativus, used in cooking or in a tea, belongs to the same genus and we usually eat its red pistils. [photo from wikipedia]