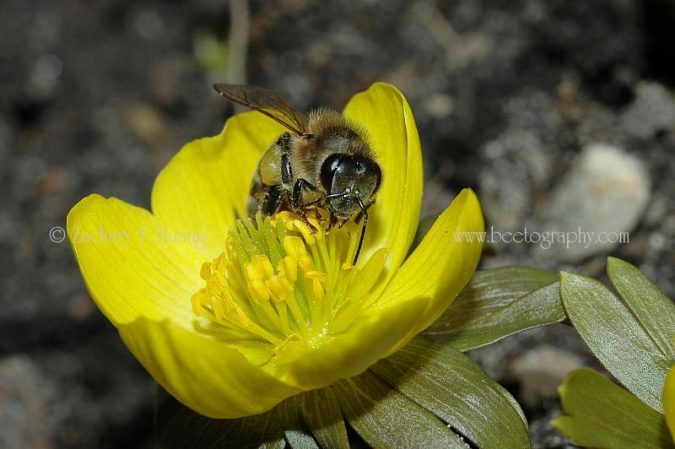 ZBAS*=Zach’s bee attraction score, by a plant. This is a subjective index (1-10, with 10 the most attractive) created by Zach.

Well, spring is finally here in Michigan, about 1 month later than some years (and I have old photos to prove this). Winter aconite (Eranthis hyemalis) belongs to the “buttercup” family Ranunculaceae. Its name comes from its early blooming time (winter) and similarity to the true aconite (Aconitum). However, Aconitum is highly poisonous while Eranthis is only slightly toxic.  The leaves, roots and floral parts are toxic but presumably pollen and nectar are not toxic to humans or bees. This plant was native to Europe and Asia but has be become naturalized in North America.

I have always observed honey bees foraging on this flower when the weather is warm enough. The plant will bloom before crocus which is also an early flower in Michigan, which in turn blooms before maple and pussy willow. I think winter aconite will bloom slightly ahead of skunk cabbage and snowdrops. Witch hazel might bloom around the same time but I have seen honey bees foraging on witch hazel only one year.

Judging their behavior on the flowers, I think honey bees are obtaining both pollen and nectar. After a long winter, honey bees are anxious to foraging on these early flowers. I am thinking to seed some winter aconite this year when seeds are available, perhaps after a month also.

A recent study (Rysiak and Zuraw, 2011) says that the nectar concentration from this flower is quite high ( 61-78%, with a mean of 72%) but the total weight of nectar is only 1.23 mg per flower, yielding an average of 0.88 mg of sugar.  I calculated a single bee takes 11 mg of sugar per 24 hrs to survive, so that worker will need to visit many flowers to contribute to the colony weight gain.  The honey crop can carry a maximum of 50 microliter of liquid, but the average load is about 25 mg by weight. 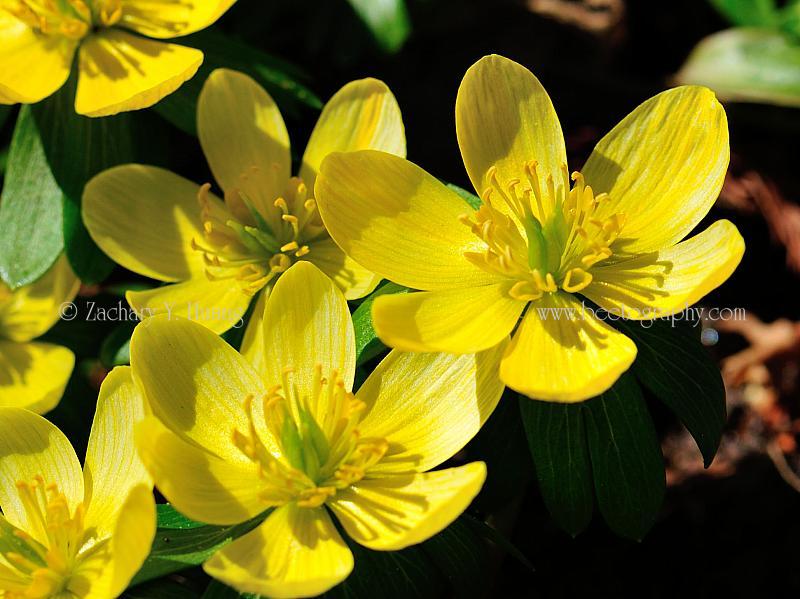 2. The first time I checked the patch of winter aconite at the MSU Beal Botanical Garden (all flowers below are shot there) this year, it was March 21, 2014. Winter aconite just started blooming but it was still to cold for bees to forage that day. This was from my android cell phone. 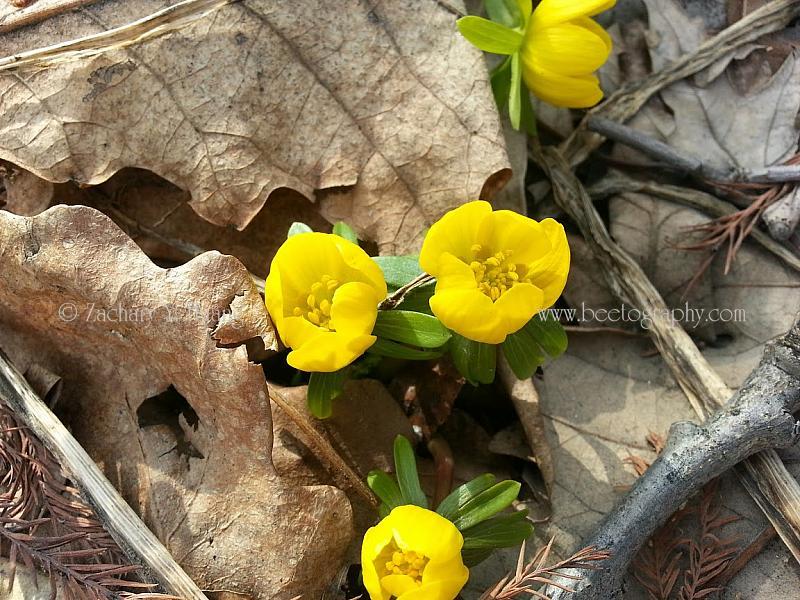 3. On March 31, 2014, 2nd trip to the garden. I only got one good picture of bees on winter aconite, having spent most of time trying to get an ultraviolet photo. I am teaching the “Macro Photography” course and took students there to shoot bugs on flowers. But only winter aconite and snowdrops were blooming.    We saw only honey bees and flies working on this flower. Most likely this is the first time in 2014 Michigan bees had a chance to forage on flowers. Photo from  Nikon D700. 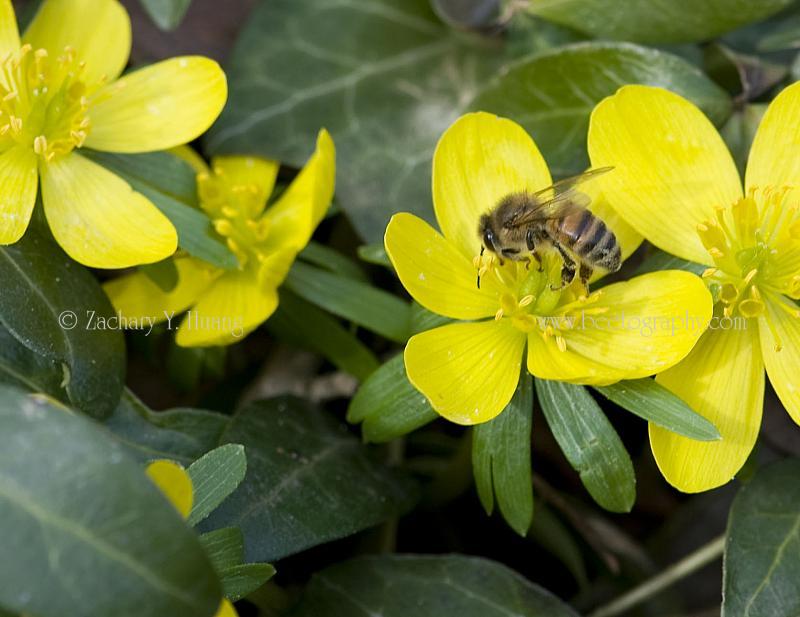 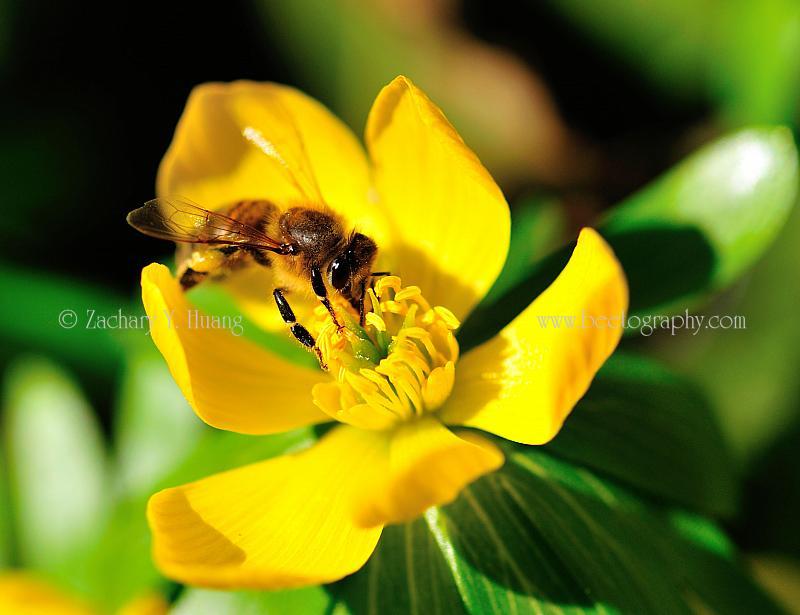 5. This bee seems to be probing for nectar, but she also has pollen on her pollen baskets (visible on her right leg). 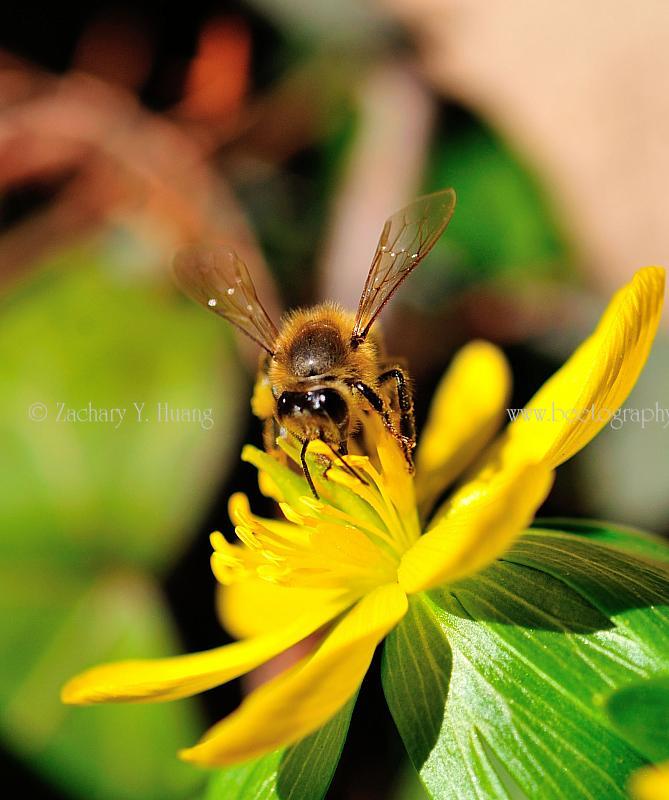 6. I suspect the four greenish structure in the center are stigmas. 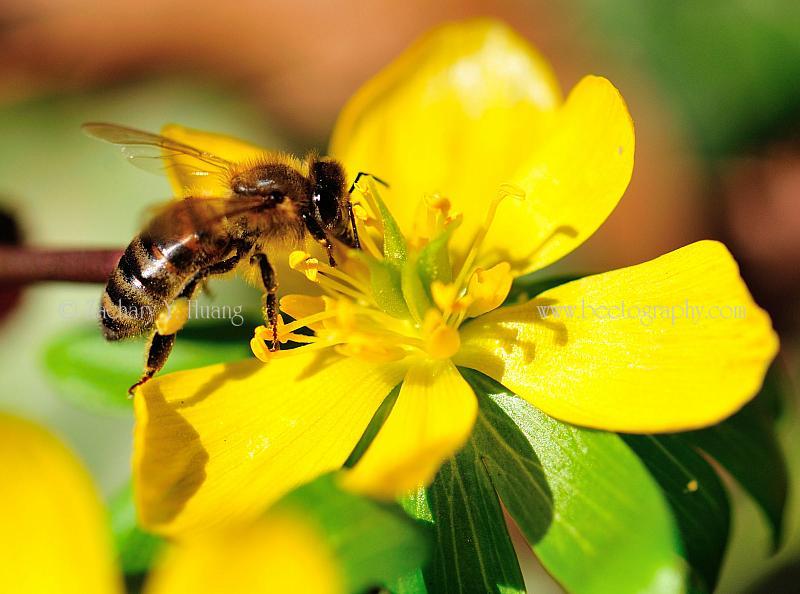 7. What a beautiful field of gold! [reminded me the song “Fields of gold” but this is not barley :)]. Shot at F2.8 to show you the depth of field. You can see three bees along the focused area. 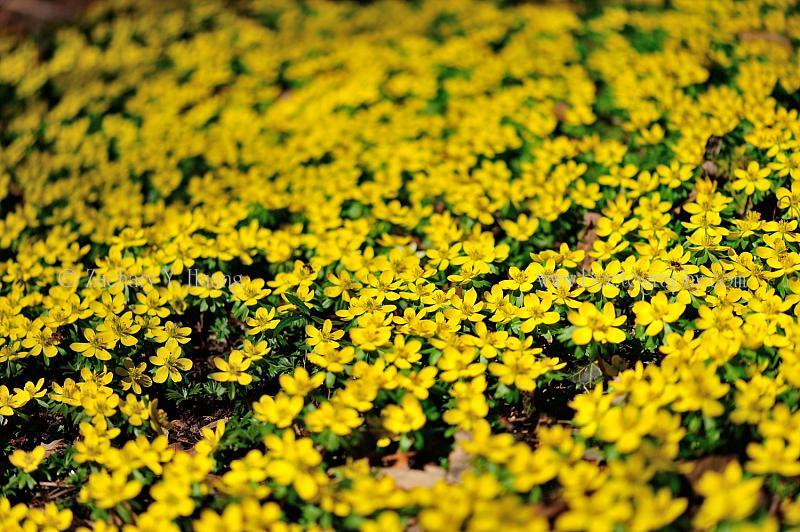 8. Getting a bit closer to show one bee foraging. 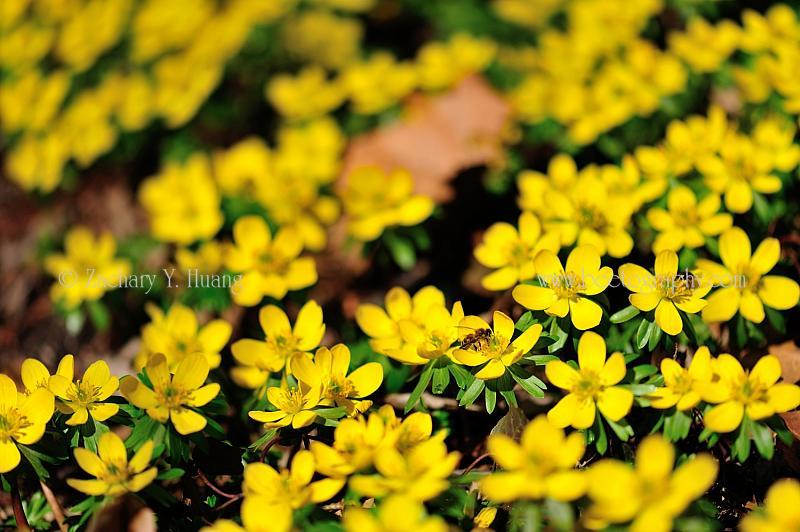 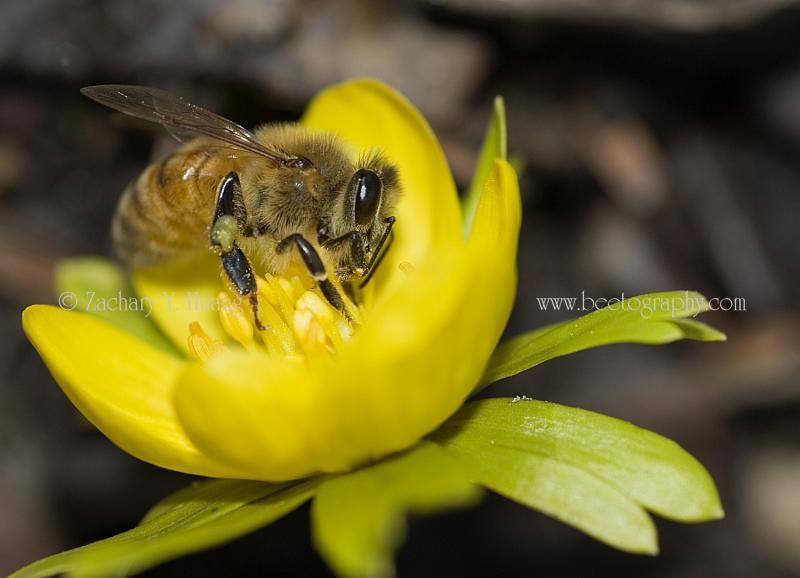 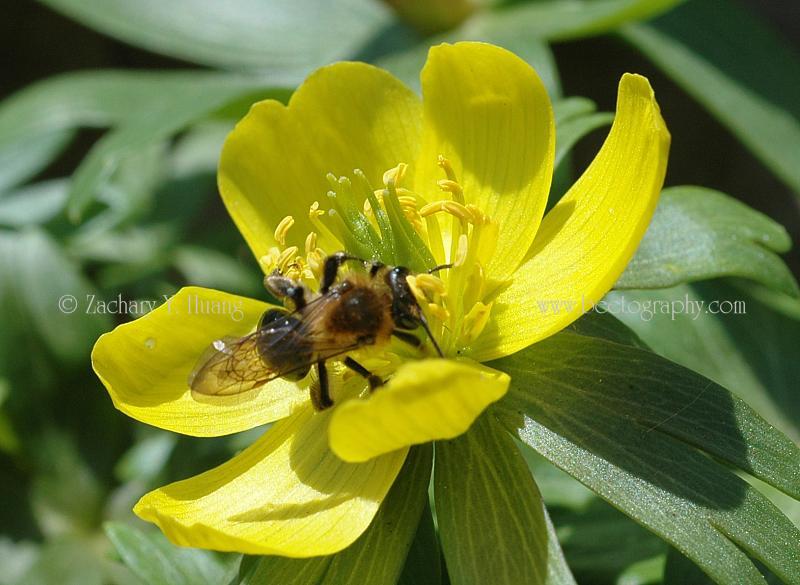 11. Now a honey bee, the pollen is clearly visible on her basket. 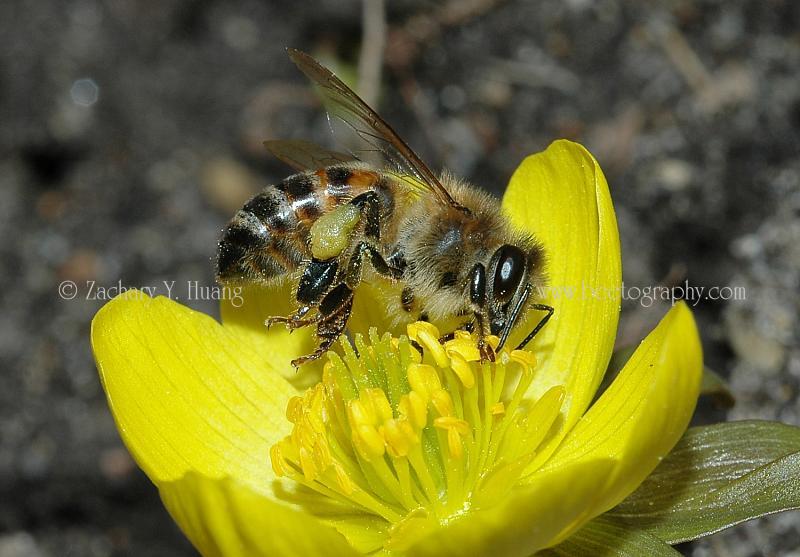 12. That year, there must be a really cold spell after the flowers bloomed. I can see the leaves were the wrong color (killed by very cold weather?). 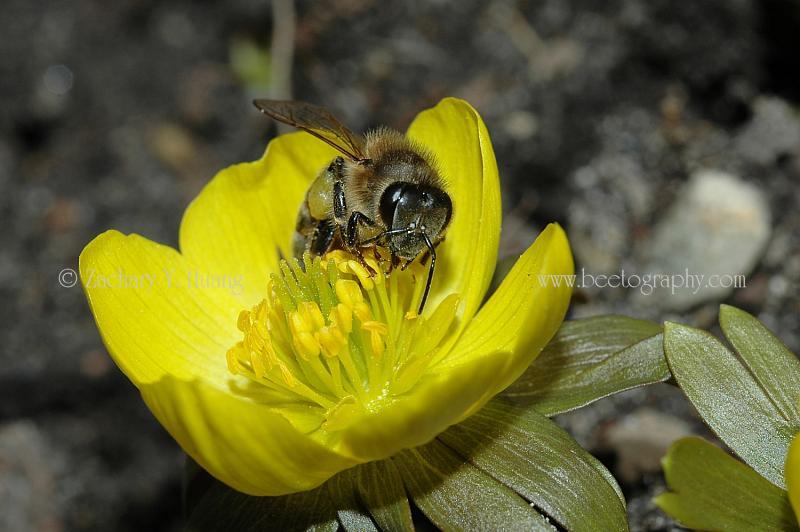 12. March 6, 2002. Even earlier. This was from my Nikon Coolpix 990, which is a point and shoot camera, 3.2 megapix.  I remember one year winter aconite was blooming in February, but I do not remember which year; and for some reason I do not find the photos of winter aconites. 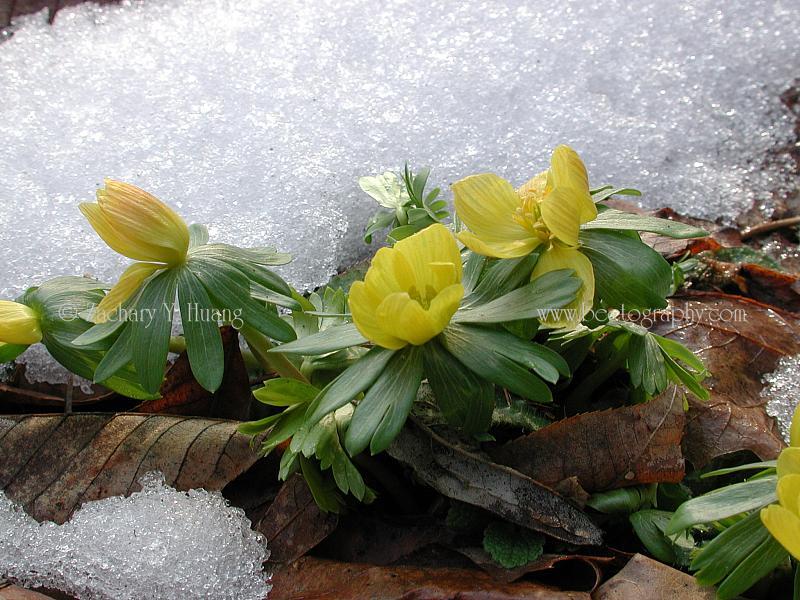 13. That day I saw flies and ants on flowers, but no bees. 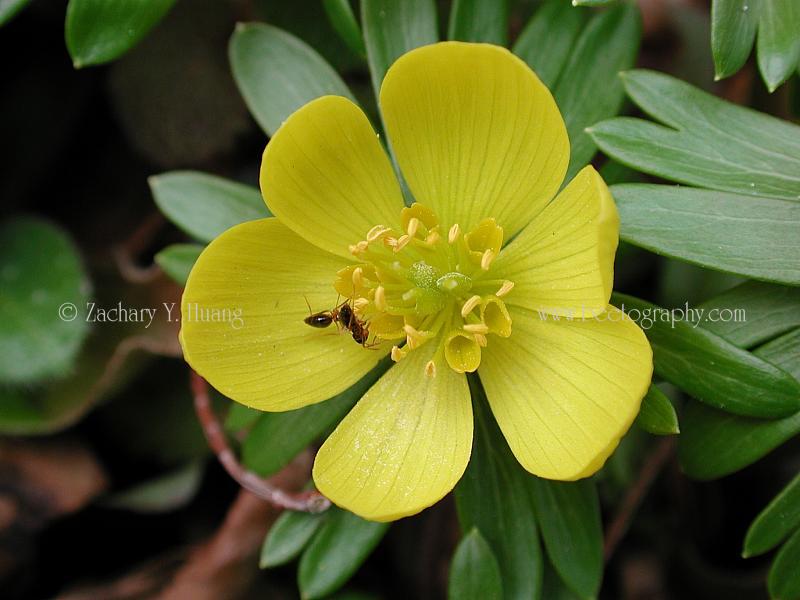 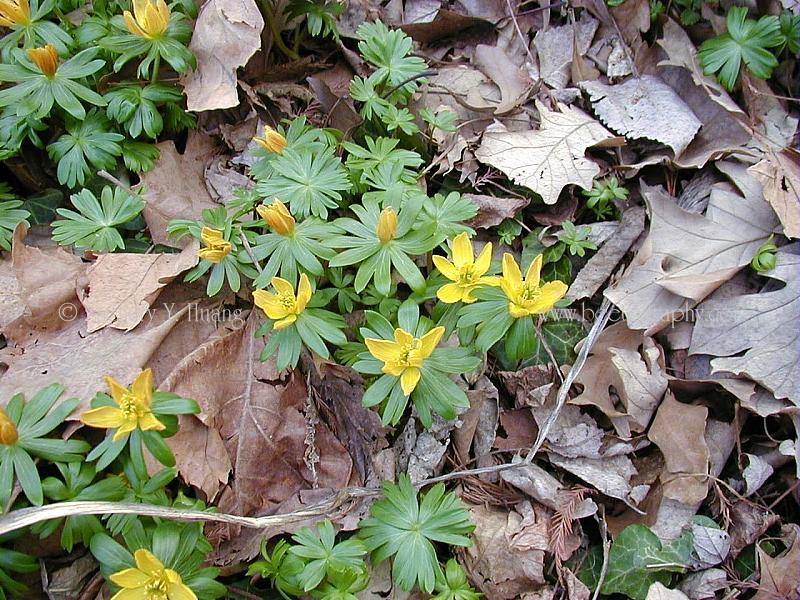 15. Finally, what does winter aconite look like under ultraviolet (UV)? Shown left is an image with visible light (by Nikon D70 from borrowed from Bernice DeMarco — Thank you Bernice!). Nikon D70 has some sensitivity to UV, even when not modified. Except D70 and D40, all other cameras have to have an internal filter removed so it can receive enough UV.  Still one needs a special lens that has enough UV transmission — most modern lens have coatings blocking UV.  With the D70, the same lens and a special filter that blocks visible light + infrared, but passes UV, I got the photo on the right.  Notice the center with pollen is UV black. In addition, the back side of petals are also black (the center of the photo has a flower I picked to show the back side) with a ring of yellow only.  Honey bees probably see a combined view of both (since they can see visible light except red!).