This is the question for us beekeepers. A recent study from Beeinformed group (linked here) says that colonies would actually have higher mortality, if bees are fed with honey, compared with those fed with sugar (via sugar boards) or nothing! This is rather intriguing but perhaps because feeding honey (usually from deadout colonies) might transmit nosema, AFB, etc.

A student said I would be killing my bees “because bees wont have a chance to seal their cracks with propolis” this time of the year. Well, yesterday, I fed my bees.

In the first yard, where we had 8 colonies, 4 were alive. I moved the honey supers to those still alive — the bees were already on the top, near the inner cover anyway. They for sure will die from starvation in a month if I do not give them food. Giving them sugar board might be a better idea, but then that is much more work compared to just lifting a super from a neighboring colony.

At home yard (MSU field lab), out of 4 overwintered colonies, 2 were still alive. One was actually inside a single medium box! They of course will run out of food soon, but I was surprised that they lasted this long.

The worse case: out of 13 colonies only 3 survived. Many of these were too weak anyway and they should have been united around end of Sept. Another half died from starvation, they did not have 60 lbs of honey on top of them.

So out of 25 colonies, 9 are alive. I plan to provide them with pollen patties in 2-3 weeks and expect to make splits out of them. I will need to purchase 10 to 15 packages to make the total colonies close to 40. This year’s package price is about $105 for 2 lbs of bees.

I should have done it on Saturday, it was 38F, but there was a MBA meeting that morning, and then I worked in my office until 5 ish.  On Sunday it was supposed to be 34 when I left but by the time I finished the 2nd yard and got into my car, it said 32 and then 27 when I got home (only 10 min! Not sure why the temperature dropped that fast). Still, I believe I might have 2-3 left in the spring if I did not give them food today.  Of course I do not have a proper control group (not giving them food) and see if feeding really made a difference.

Photos taken by a cell phone (Samsung S3) and I did not adjust for exposures…Snow is a bit dark — but actually matching what I saw that day. 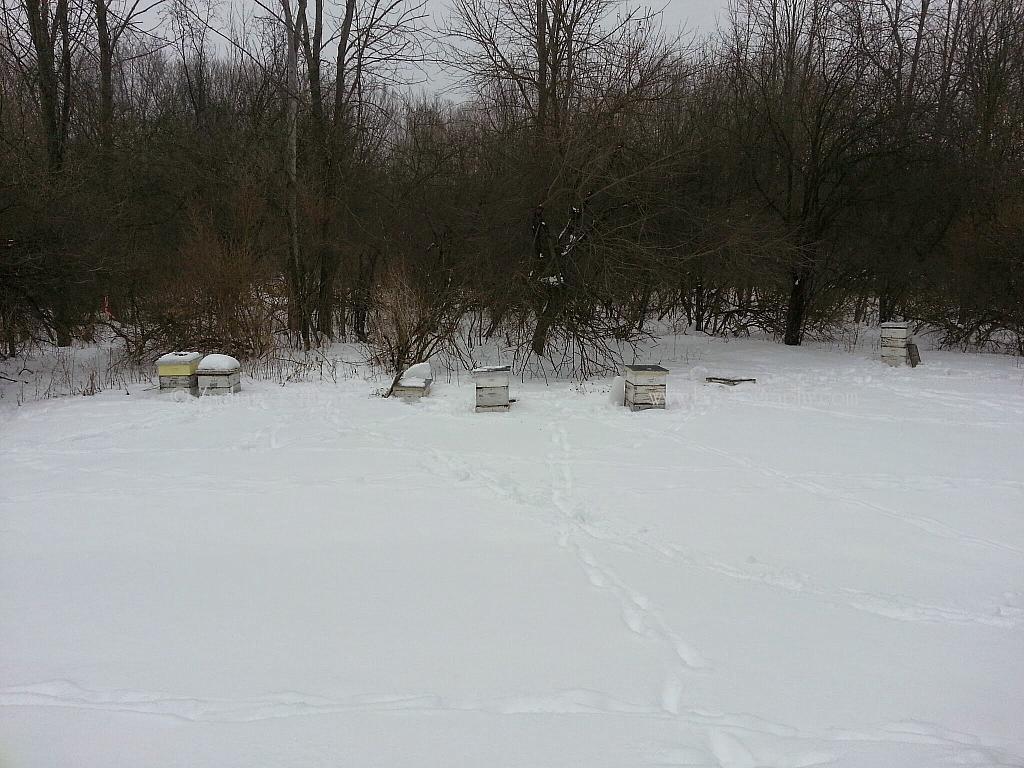 2. This colony should be strong enough to pull through. The cluster is not all way to the top yet so it looks smaller. It was about 34 F when I checked them. 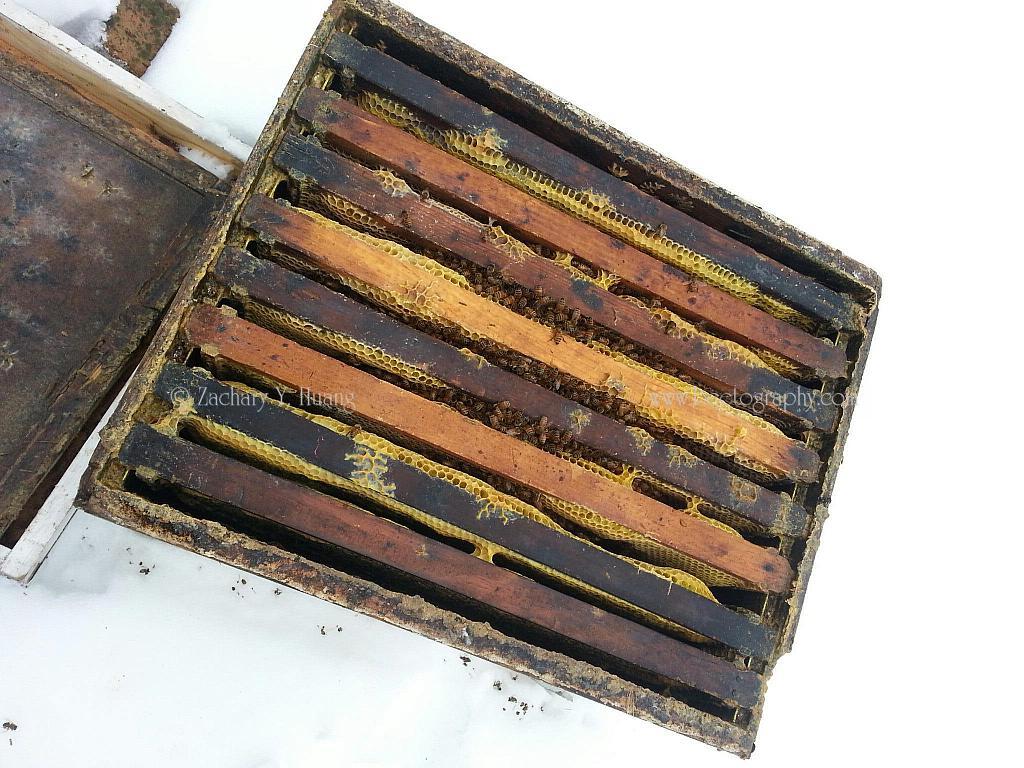 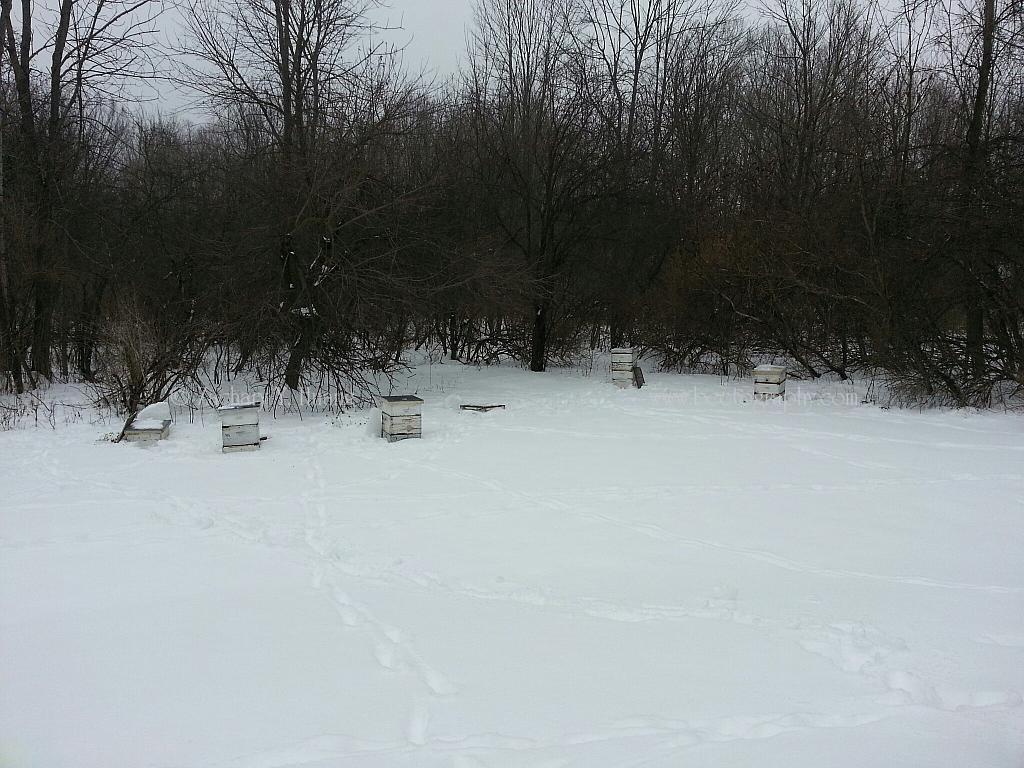 4. I had to walk about 20 min to the lab from here….too much snow for me to drive in, and I had trouble even just to open the gate due to the drifted snow near the gate. 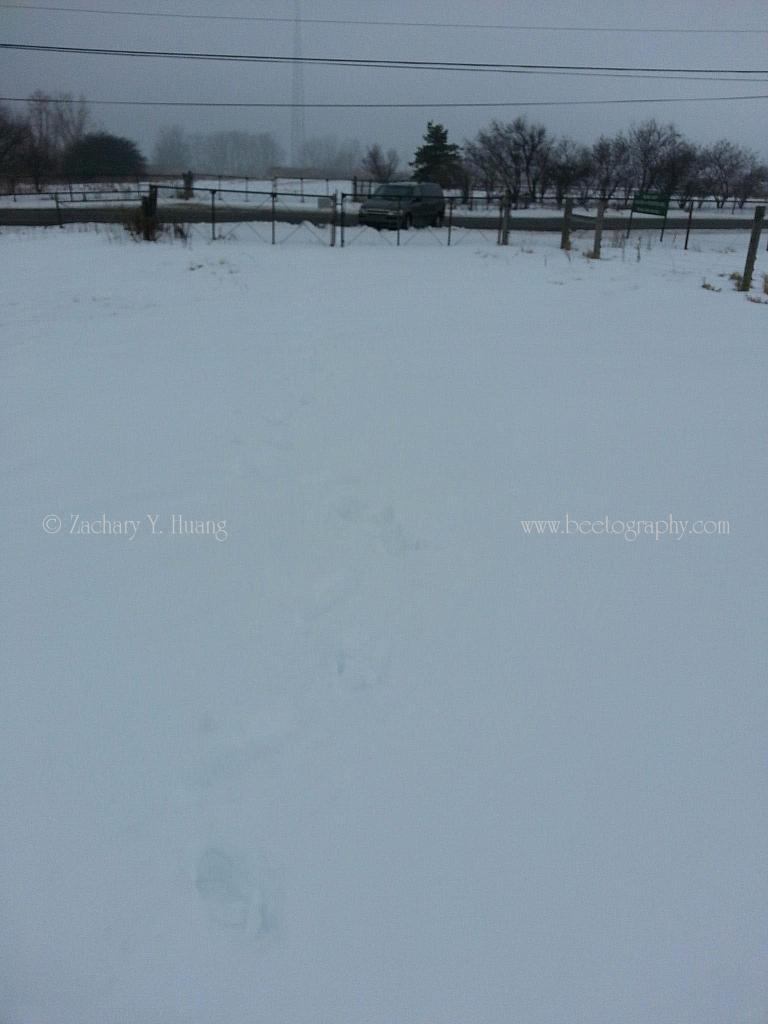 5. A sign of nosema disease (mostly like to due to Nosema ceranae, because Nosema apis shows up only in 5% of bees, if the bees have spores). but this colony survived.  The top super was transferred from another (dead) colony. 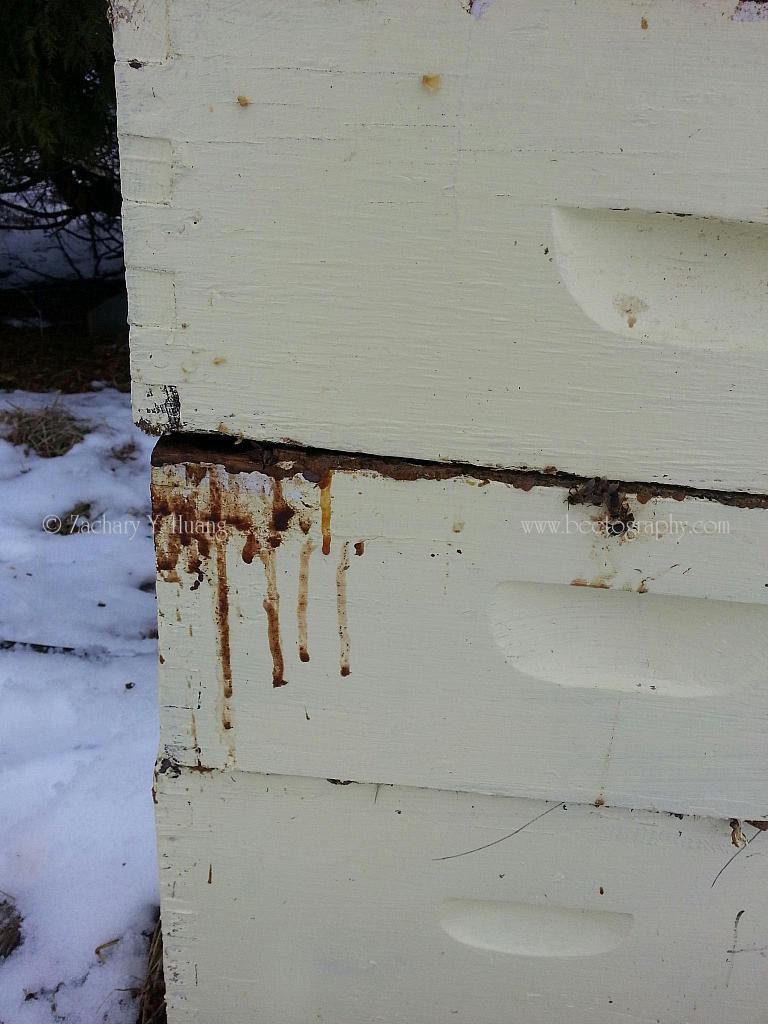 6. This one also had nosema but it died. you can see the cluster between the 2nd and 3rd frame from the right side. The cluster was too small. 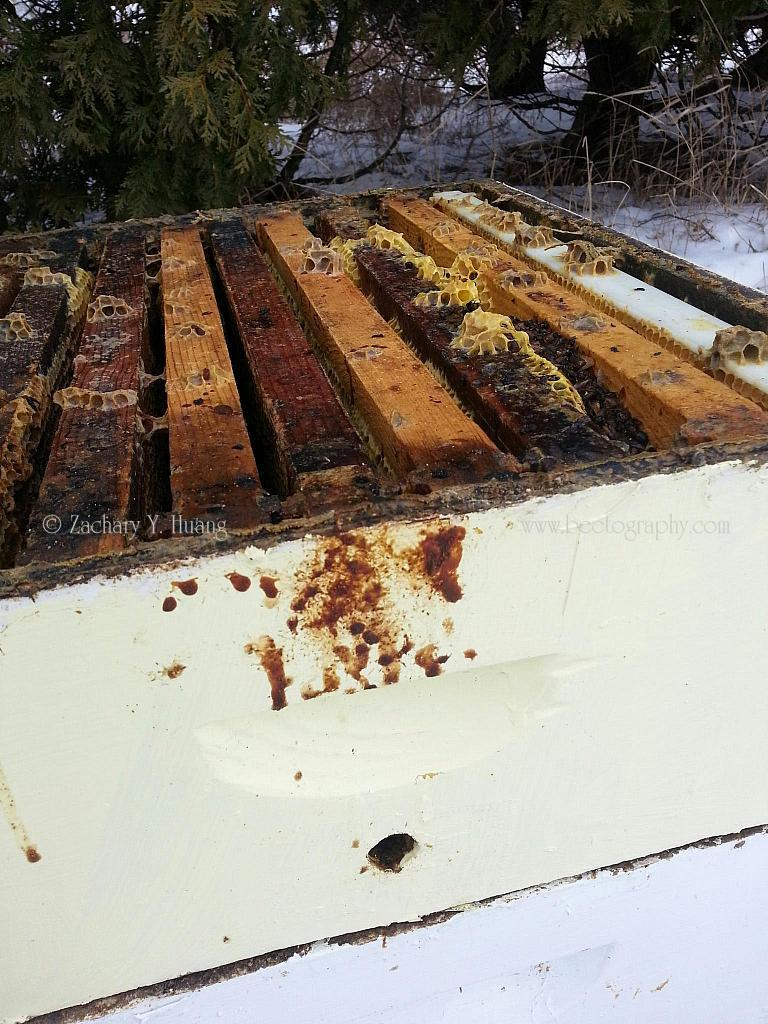 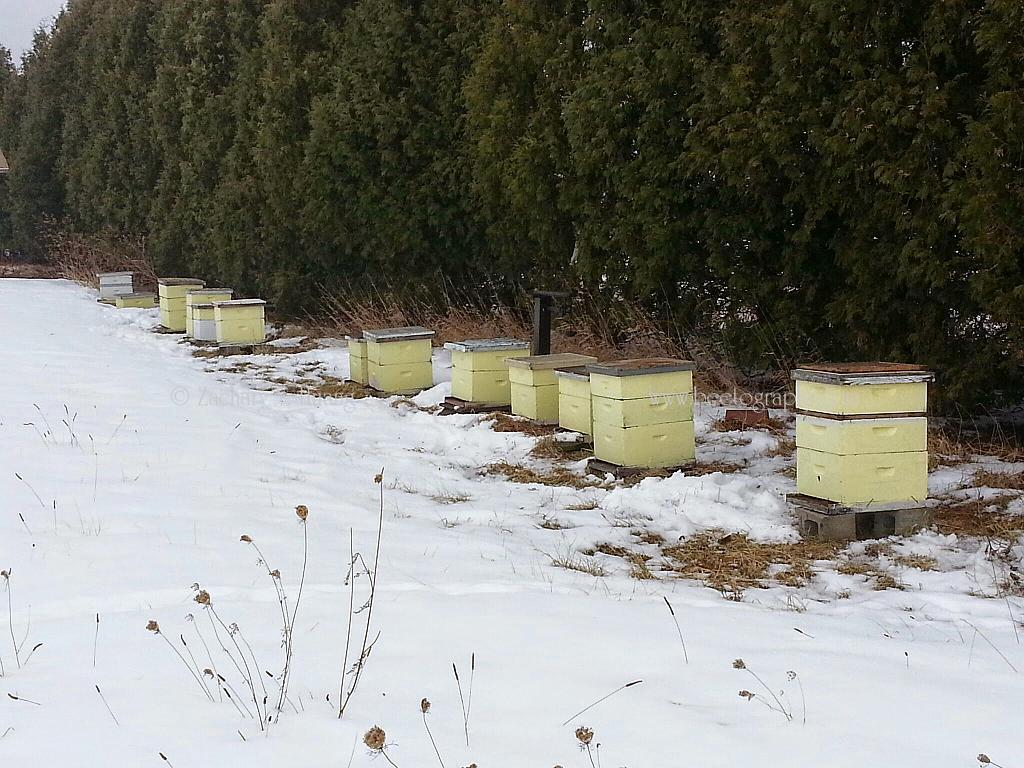