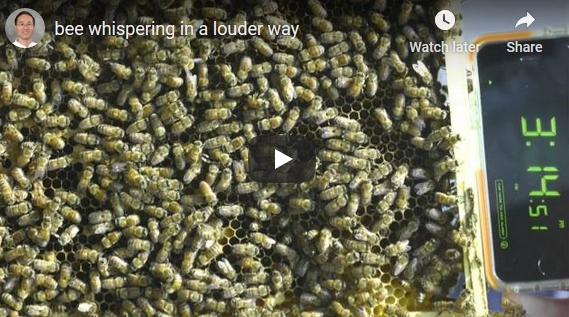 Beelieve it or not, I found this when I was bored one day. That was when I was a student, trying to get my Ph.D. and was observing bees 8 hours a day. I started yelling at bees one day and they all stopped!

I have since only shown this  to a few people.  I wanted to do a video recording but never got around to do it until  last year’s HAS meeting. I was doing a bee behavior class anyway (I called it Beehavior), so I brought a tripod and fixed a cellphone (I believe someone graciously loaned her iPhone to me) next to the frame and started singing to the bees.

I did this because I did not want people to think that I stopped a video frame, then replicated that frame for 2 minutes, to give the illusion that bees stopped moving.  Now, the digital clock proves that to be unlikely (not impossible, if someone really wanted to fake a video). But I was doing this recording in front of about 20 people. As you can hear, students also practiced once, thought the effect was not quite as good :)

I am planning to have an extensive video collection of various honey bee behaviors [Zach’s beehavors]. So stay tuned.

2 thoughts on “Singing to the bees”