For the first time in my life, I have two photos published simultaneously by the two major beekeeping magazines in this country.
1. A bee foraging on Schilla, an early spring plant in Michigan.

2. A bee foraging on crocus. Look at the pollen cover her entire body! 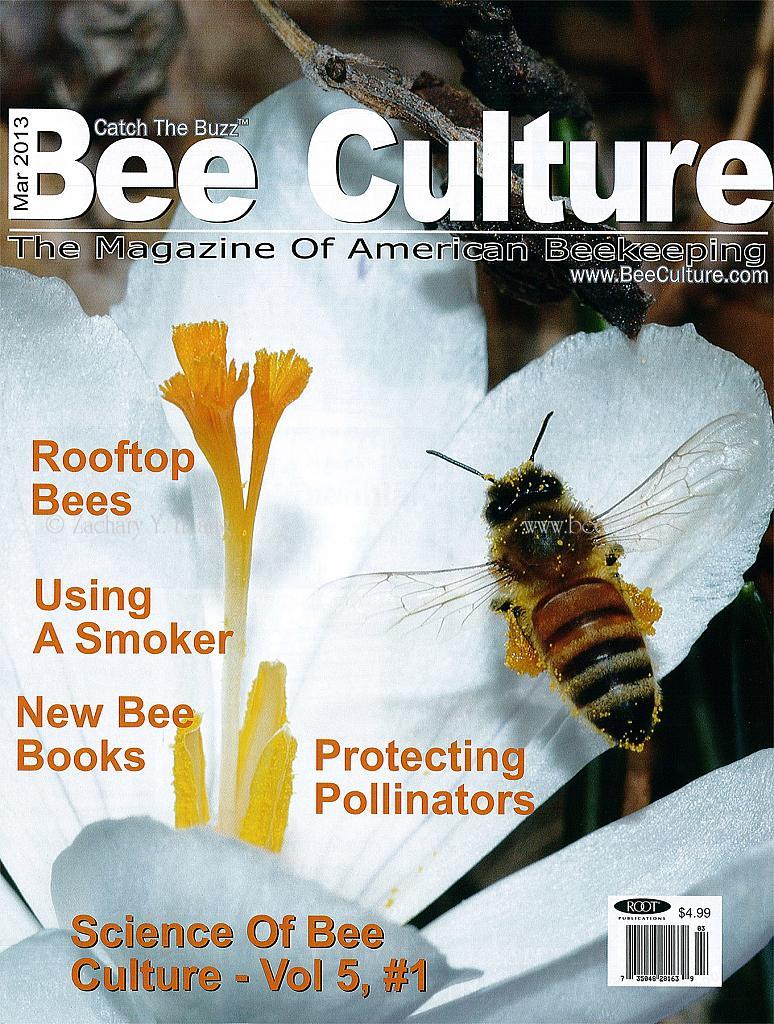 For other cover photos： http://cyberbee.net/index.php/bees-on-flowers/Cover-photos

In these issues, my lab has published 4 abstracts. The numbers refer to the numbers published in American Bee Journal.

#2 was by Dr. Meghan Mibrath, who joined our lab since last summer as a postdoctoral fellow.  This paper should be accepted soon in a academic journal.

#3 was by Dr. Xianbing (Alex) Xie, who was here as a postdoctoral for 1.5 years and left Nov 1st, 2012.  This research was jointly funded by so many different organizations! Foundation for the Preservation of Honey Bees, National Honey Board, Almond Board of California, and Michigan State University.

#16 was by Dr. Wenchao Yang, who visited my lab for 6 months and tried hard to get the HPLC to work with bee pollen.  This work is nearly accepted by a major journal (under revision).

#17 was by two visitors in my lab, Shujing Zhou and Dr. Xiangjie Zhu. I was not involved in this study so it does not have my name.

We have known for almost a century that the microsporidia Nosema apis is a serious parasite of the Western honey bee (Apis mellifera).  Only recently, we have identified that a related microsporida, Nosema ceranae, has transferred from its original host, the Eastern honey bee, and is causing serious infection in A. mellifera as well.  The full effects of Nosema ceranae infection in this new host remain unknown.  Numerous studies have examined mortality after experimental infection with N. ceranae, but they have had highly variable results. One reason for this variation may be differences in experimental techniques. We examined one technique, CO2 anesthesia, that may affect honey bee survival in the presence of nosema infection. We hypothesized that the use of CO2 anesthesia when infecting bees would reduce survival.  We used four treatments (Control, Nosema only, CO2 anesthesia only, CO2 anesthesia /Nosema), repeating the experiment with three colonies.  We found that bees infected with Nosema spores alone had significantly lower survival than control bees (median survival = 21 days and 23 days, respectively), and that CO2 anesthesia had a greater effect on survival than nosema infection alone. Bees infected using CO2 anesthesia survived for significantly shorter times, regardless of their infection status (median survival = 18 days for both groups). Interestingly, bees infected using CO2 had significantly fewer spores than bees infected without anesthesia.  These results indicate differences in honey bee mortality experiments may be due in part to experimental technique. Overall, our survival rates were higher than these previous nosema mortality experiments, indicating that variation in honey bee resistance to nosema may be an important factor in determining survival after being infected with this parasite.

Previous studies in the Western honey bee, Apis mellifera, have shown that pollen foragers have a lower sucrose threshold when tested using a proboscis extension response (PER) assay. Based on the biology of the Eastern honey bee, A. cerana, we hypothesized that A. cerana should have a lower threshold for sucrose. We compared the sucrose thresholds between pollen foragers and nonpollen foragers for A. cerana and A. mellifera in Fujian Province, China. Pollen foragers were more responsive to sucrose than nonpollen foragers in both species. Across the two species, A. mellifera was more sensitive than A. cerana in both types of foragers. In mixed species colonies where both species shared the same colony environment, A. mellifera also showed a higher PER score than A. cerana, so the higher sensitivity of A. mellifera was not due to a different colony environment. Based on these data, we predicted that nectar foragers in A. mellifera should bring in lower concentration nectar compared to that of A. cerana. We determined the nectar concentrations at each hour of seven-paired colonies of the two species of bees for seven days but found that the concentration of nectar foraged A. mellifera was not significantly higher than that of A. cerana.  There might be other mechanisms to enable A. cerana to perform well in areas with sparse nectar resources.

Population genetics of island species can provide us important information for their evolutionary history, genetic diversity and conversation. Hainan is a large island in south of China, with different environment and has been separated from the mainland for 10 million years. Apis cerana cerana is an important endemic species in Hainan. Even though previous studies have found 3 haplotypes by sequencing 9 honey bee workers in Hainan island(Jiang & ZHA., 2007 Sci. Agric. Sin. 40:7, Tan & Warrit, 2007 Apidologie 38:3), the sample size and number of collection sites were small. In this study, Apis c. cerana samples were collected from throughout Hainan island, and genetic diversity was determined by mitochondrial DNA fragments of tRNAleu-COII sequence.

A total of  715 colonies were collected from Hainan Island, with 16 collection sites range from N 18°24.361′ to N 19°54.254′ and from E 108°50.359′ to E 110°52.689′. Workers were killed immediately by immersing them into absolute ethanol and kept at -80°C until processed in the laboratory. A single worker from each colony was examined by mitochondrial DNA. Mitochondrial analysis was carried out on a polymerase chain reaction produced from the intergenic tRNAleu-COII region (Garnery et al., 1993 Experientia 49:11), with the primers E2 located at the 5´-end of the tRNAleu gene, and H2 located at the 5´-end of the COII gene. An automated sequencer ABI3730 xl (Applied Biosystems, USA) was used to sequence the samples. Sequence data was aligned with the Clustal X1.83 program, and the haplotype diversity (Hd), average number of nucleotide differences (K) and nucleotide diversity (Pi ) were calculated by DnaSP5.00.07.

A total of 48 haplotypes were found, 43 of which had not been previously published (Accession number: JQ323003-JQ3230045). There were 38 polymorphic sites, including 12 singleton variable sites, 23 parsimony informative sites, 1 insert site and 3 deletion sites. The average diversity of haplotypes was 0.742±0.017, the average nucleotide difference K and the nucleotide diversity of the honeybee samples Pi were 1.248 and 0.00354±0.00013 respectively, indicating the abundance of the haplotypes. The haplotype diversity (Hd) was unevenly distributed in all collections. The Wangning samples (WNLJ), from a southeast site in Hainan, were detected 3 haplotyes with the lowest haplotye diversity (1.171±0.066).Compared with the major haplotype (H02), the primary haplotype in Hainan island was H01, accounting for 46.15% of all samples in Hainan. But H02 was detected as the main haplotype in 3 collection sites (TCZJ, QZHM and QZJC), which were the primary places with introduced the mainland colonies. In addition, there were 74.27% honey bees in Hainan detected to have haplotypes which had the transition in 117th site (G-A), such a greater percentage was never detected in Chinese mainland.

Mainland honeybee introduction and the rearing queen led to the obviously different genetic structure and lower abundance diversity in some places in Hainan, which was the reason of the unstable genetic structure in Hainan honeybee population. Results of this study will provide us the scientific basis for the conservation of Apis c. cerana in Hainan.