I get asked by many as to why I constantly take photographs of honey bees on flowers. Don’t they all look the same after a while? Why bother to take photographs when google can find you so many on the same flowers? This is not an easy question to answer.

Well, I started to take photos of bees on flowers only really after digital SLR (a camera that exchange lens, structurally very similar to old film cameras, with a mirror that flips during exposure) became affordable to me (that means below $1000 in 2004). I bought my first SLR in 1985 but I gave up macrophotography because film was so expensive and I could only get 1-2 good shots on a roll of film. So I basically waited until 2004 when I bought my first digital SLR, a D70 (6 megapixel). Since then I basically carry my camera everywhere I travel to and take photos of honey bees on various flowers.

No two photos will be the same, quite similar to the saying that you cannot step into the same river twice. Locations are different, this records the distribution of a certain plant at what location. What other flowers are blooming during the time are different, indicating the relative attractiveness of this particular flower to honey bees. Of course honey bee species or subspecies might be different depending on the location.

I take photos not only because I love bees, and bees are beautiful, but also because each photo can be a good ecological record for the above reasons. Ultimately I would like to have a database of plants which honey bees visit, and rank the attractiveness of the flowers to honey bees. Taking photos of bees on flowers also forces me to learn botany – I try to keep myself up to date with the changes of taxonomy of plants so that I can tell an accurate story. On a personal level, I would like to have at least a honey bee photo on a location that I have traveled to, that way I can remember that place in a “bee way”.  Many photos will also tell a story that have biological information. Someday I would like to publish a book with photos I have taken over the years, so today you will get a flavor of that.

[I am using all 2015 photos. I will try to make this a yearly tradition in the future]

April 6, 2015. Winter aconite  bloomed much later last year, MSU Beal Botanic Garden. This year, the same flowers were blooming (and with honey bees) on March 12. Winter aconites are one of the very early flowers in Michigan that give honey bees that precious pollen. Crocus blooms right after this flower. 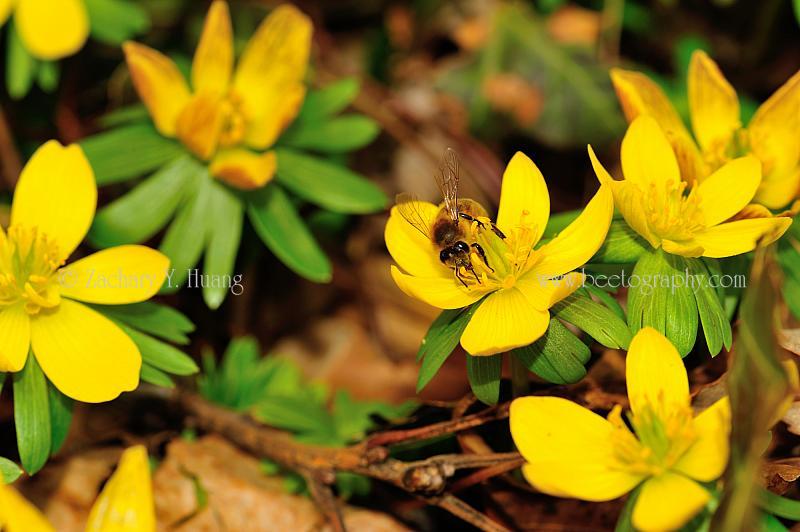 June 6, 2015. I know people in the south (e.g. North Carolina) tell me that holly is a good nectar source. I do not really know when they bloom here in Michigan. One day by chance I checked the two trees near the north door of CIPS, MSU and saw bees were really working on them!  I went home and brought my camera and took about 80 photos. This one is a close up showing the bee is really licking the nectar from one flower. This tree is diecious (with male and female flowers on different trees), I was told the flowers we see here have sterile pollen so technically the flowers are only female, despite of them having both female (stigma) and male (anthers) parts. 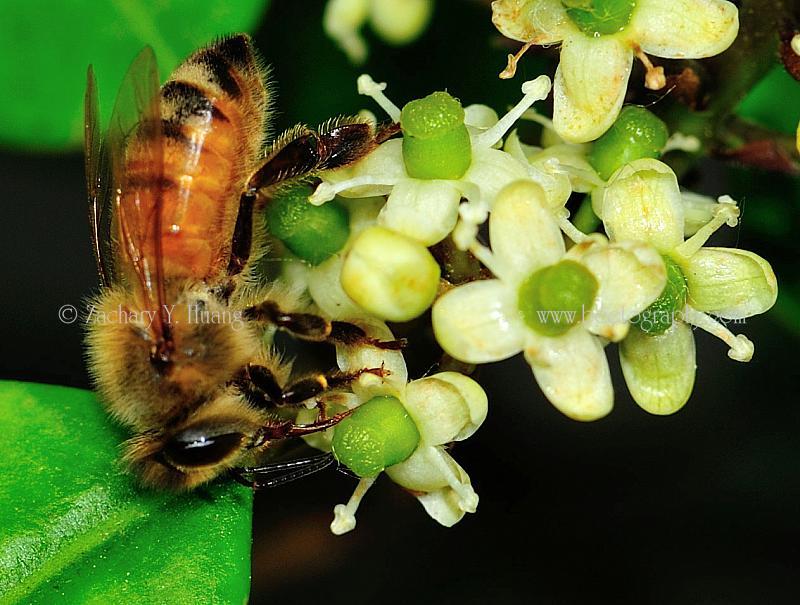 July 8, 2016. Heartland Apicultural Society conference was at Albion Michigan (closest to me!) and of course I had to bring my camera there also. I have never seen bees on this flower (a commonly planted agave, in the family Agavaceae, now moved to Aasparagaceae. After a long observation, I determined that the bees (2 or 3) were foraging for water on the flower petals only. 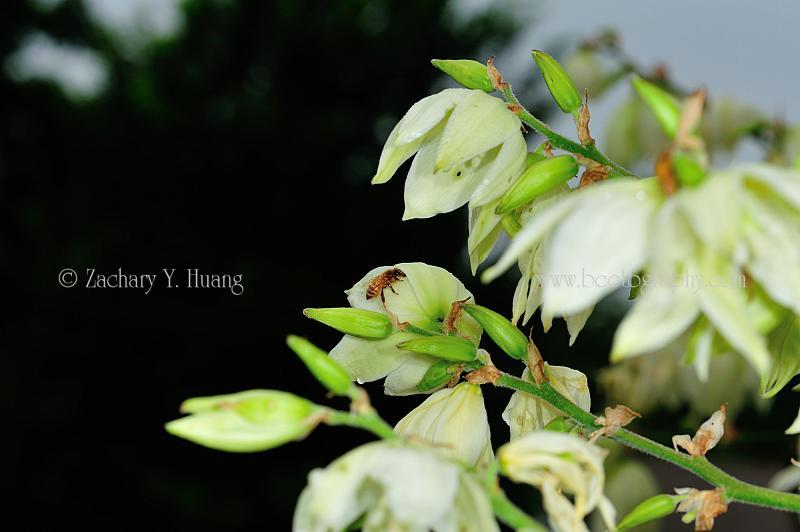 July 24, 2015, Shaoshan, Hunan, China. I was visiting my mother and brothers. I usually try to find time to shoot some local flowers. Suddenly I saw a spider catching a honey bee! I never had a chance to shoot this. You can also see 3 flies, trying to suck some juice from the dying bee. These flies are in the family Millichidae. Supposedly these flies are klepto-parasites, they feast on a dying honey bee’s hemolymph (that is the word for insect blood!) when the poor bee was being eaten by another predator. These flies cue in the alarm pheromone the bee releases. It would be interesting to study the phylogeny (evolutionary relationship) of these flies in different continents. I have seen spider/bee/fly photos taken in North America, but it is not clear if they are the same species or not. 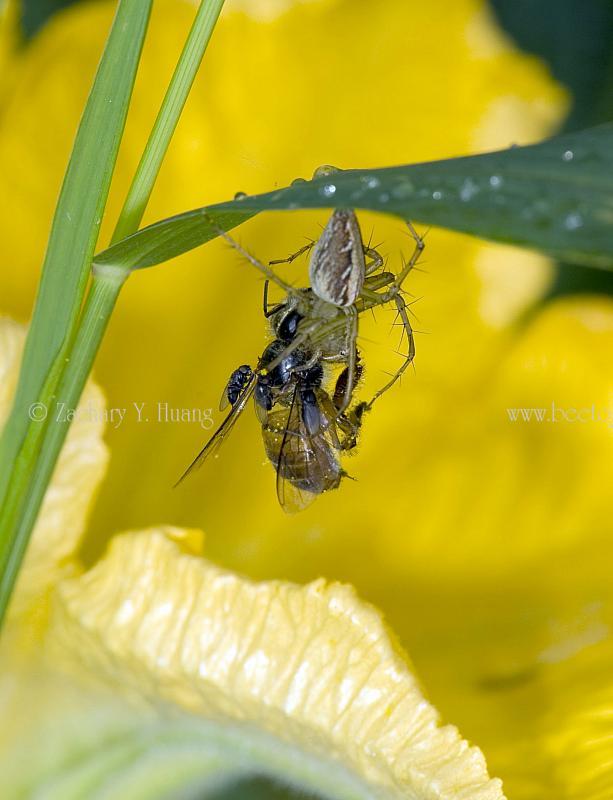 July 30, 2015, Ningxia, China. Apis mellifera foraging on sainfoin (Onobrychis, Fabaceae) flowers. The flowers are really pretty! I was told Western US also grows this plant as a nitrogen fixer as well as for cattle feed, but I have wanted to see this flower for a long time after seeing pictures of it in the internet. 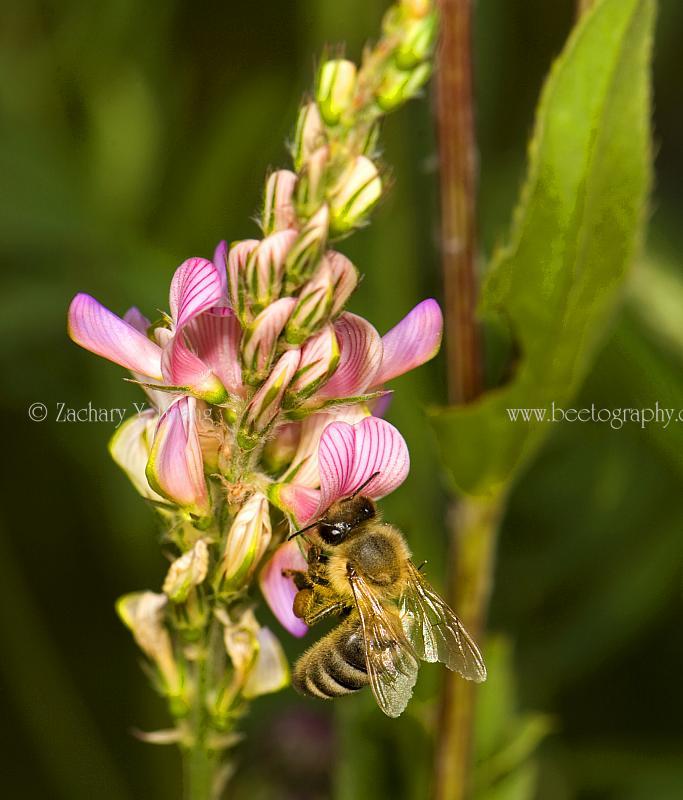 21. An Apis cerana  foraging on a type of mint (Elsholtzia densa), Ningxia, China. The badly damaged wings tell you that this bee is rather old, she has been foraging for a long time and perhaps only has 2-3 more days to go before she will die.  The average foraging life for our bees (Apis mellifera) is about 10 days during summer. 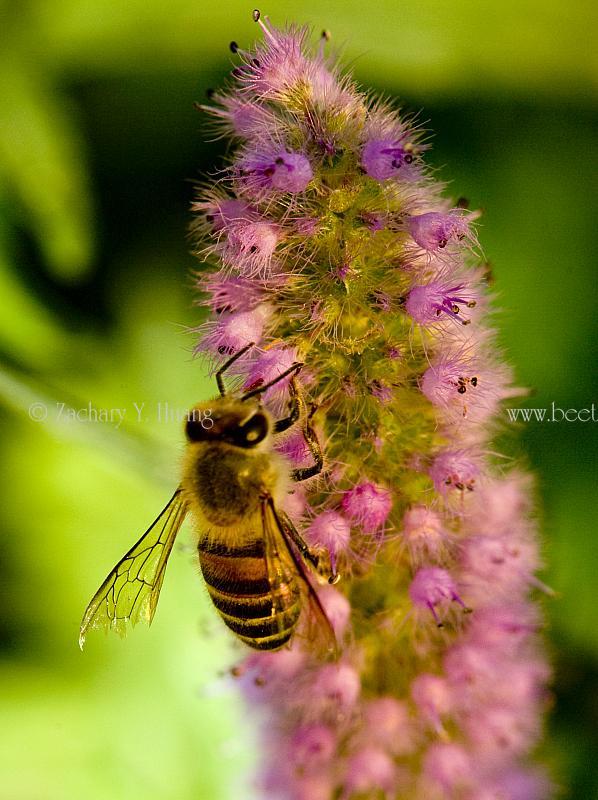 Aug.5, 2015. Hoya (Hoya, Asclepiadeace) was blooming on our deck. The plant has to be “root-bound” to bloom — it somehow has to be stressed first, otherwise it wont flower. I saw bumble bees coming to forage on them so I waited for honey bees. Indeed, one bee came back consistently for 3-4 days. I think it is the same one. I should have marked it with a paint to verify this. 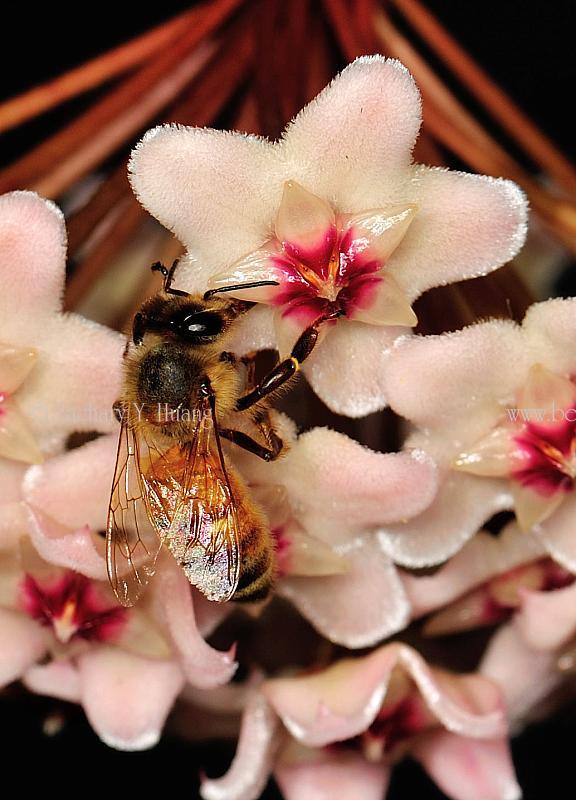 Aug. 7, 2015. I cannot help but to show this beautiful flower, a common black-eyed-susan (Rudbeckia hirta, Asteraceae). What we see are on the left, we can hardly tell the two colors on each petal, but what bees see (right) is so strikingly beautiful! This is done with a filter that simulates bee (or insect) vision: with infrared and some red blocked but all visible light and some ultraviolet (mostly 320-400 nm) recorded by a Nex7 camera. This, of course, requires that the camera is modified (with the filter in front of CCD replaced with one that transmits UV) and also a special lens that allows UV to go through. Most modern lenses have coatings to remove UV so photos are not as hazy. I become interested in recent years in how honey bees see flowers differently from us. 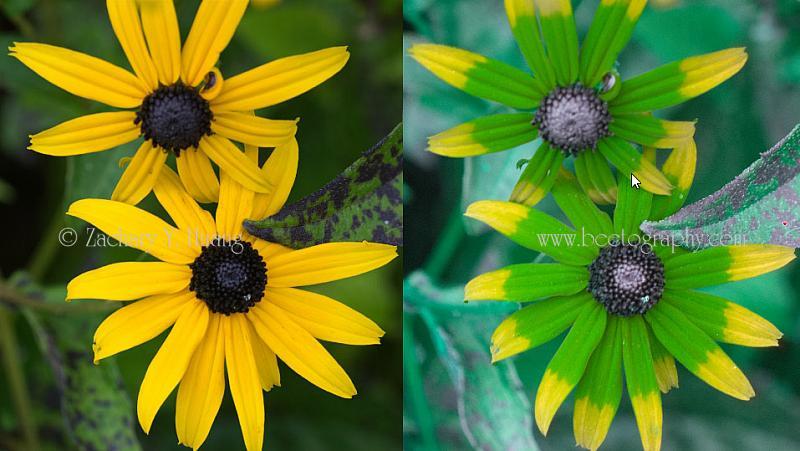 Aug 22, 2015. I was surprised that MSU has a Chinese plant, nutgall tree (Rhus chinensis, Anacardiaceae) blooming near the Music building on that day. Bees were swarming all over the flowers. In China an aphid makes galls from leaves, and the galls are harvested and used as a medicine (Wubeizi). The aphids must not be here since I did not see any galls on leaves. 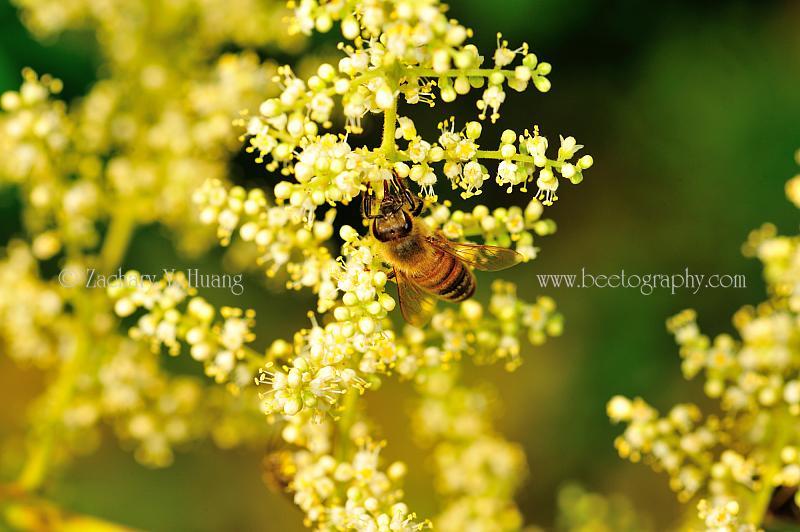 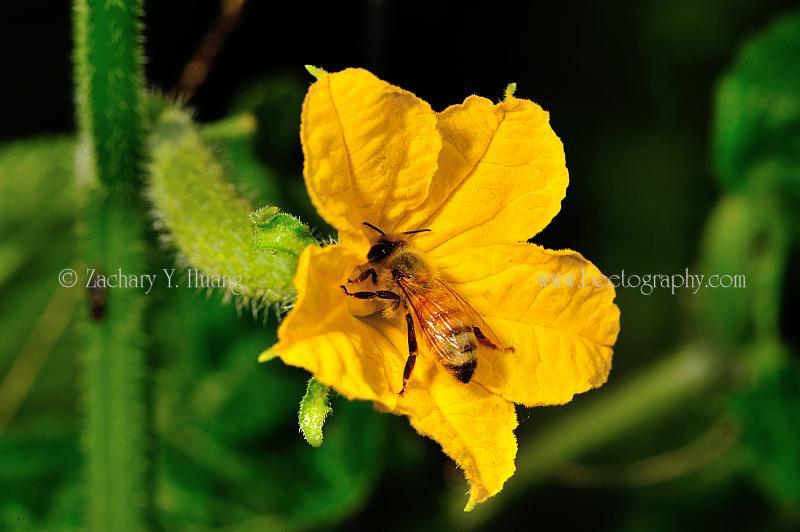 For 2016’s flowering time, I will periodically update a time line with whatever flowers I have observed blooming, at http://bees.msu.edu/flowers.

Most bee on flower photos are at http://ww2.beetography.com
Other photos related to beekeeping, bee anatomy, meetings, etc are at http://cyberbee.net