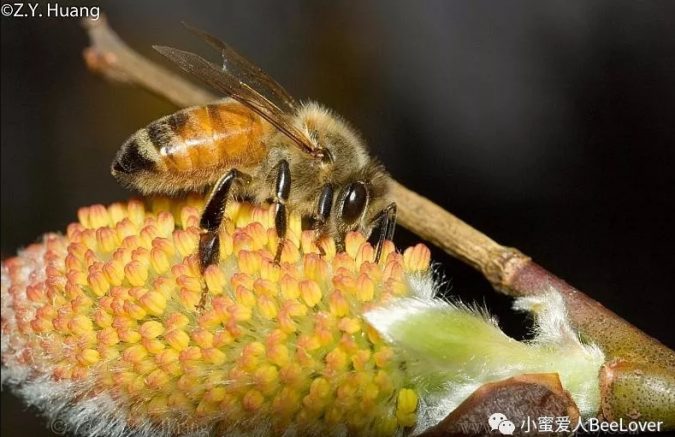 Willow is dioecious, meaning the two sexes have difference “houses” (i.e. different plants). The two genders are different in color, the male flower is fluffy, yellow to off-white, and the female flower is green (I haven’t seen it before!). The Chinese common name “willow of faded color” is actually because of the Latin name: discolor (two colors) became confused with discolored.

The common name in English is pussy willow. It is said that in winter the male tree will have beautiful inflorescence (catkins) shaped like cat’s paw, hence the name.  Again I have not seen them.

But what I did see, were many male flowers during bloom. because there are many bees (you can hear the buzz far away)! The male flowers have lots of pollen and nectar. This flower is an  native plant in the US.  It is usually a bush, but it can grow to 3-4 people tall, but the branches are still very thin. 2. These photos all used flash to darken the background. 3. The bees are clearly collecting honey. 6. The flower then turns yellow, and finally turns white. This is not a honey bee, but a solitary bee. 7. These flowers are more whitish (near the end of bloom) — so perhaps faded color is also ok :) 8. This year, it bloomed on April 21, 2019. I took a visitor to study the flowers. The black spots on the blue sky background were all bees, most of them were solitary bees. There were also many honey bees.