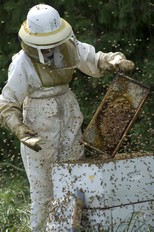 A graduate student tends bees at the MSU apiary. Photo by Kurt Stepnitz

Click on an image to view a larger or high-resolution version.

The MSU researchers for the first time were able to produce in the laboratory proteins that help channel sodium ions through cell membranes of parasites known as Varroa mites. The research, using cellular frog eggs, also found that these proteins react to chemicals differently than the sodium channel proteins in honeybees, a finding that could be a key to controlling the mites.

Fluvalinate paralyzes the mite and eventually kills it. But in addition to the problem of growing mite resistance, the pesticide can harm bees and contaminate honey if not used extremely carefully.

The MSU scientists also found two amino acids in the mite sodium channel that make the mite resistant to tetrodotoxin, or TTX, a deadly poison found in pufferfish not currently used as an insecticide

“Chemicals such as fluvalinate and TTX target sodium channels in insects and mites, so this basic research opens the door for more applied research on chemicals to control mites and other pest insects,” Dong said.

Varroa mites invaded the United States from the eastern hemisphere in 1987 and can kill an entire honeybee colony within a year, feeding on bee blood and transmitting viruses. The mites wiped out nearly 50 percent of the U.S. commercial honeybee population in 2004.

Varroa mites also may possibly contribute to colony collapse disorder, or CCD, according to the U.S. Department of Agriculture. First described in 2006, CCD is the official name for the disappearance of hundreds of thousands of bees from hives around the world. Scientists have not been able to find a cause.

“These mites are a big, big problem for agriculture,” Huang said. “Nearly 80 percent of food crops depend on pollination.”

In Michigan, fruit and vegetable crops valued at $400 million depend on honeybee pollination and honey and beeswax add another $5 million to the state’s economy each year. Nationwide, bee pollination is responsible for $15 billion in added crop value, particularly for specialty crops such as almonds and other nuts, berries, fruits and vegetables, according to the USDA. It’s estimated that one out of every three bites of food people eat is made possible by pollination.

The research is published in the Dec. 4 issue of The Journal of Biological Chemistry.

The MSU research is funded by the U.S Department of Agriculture and Project GREEEN, Michigan’s plant agriculture initiative at MSU. The research of Dong and Huang also is supported by the Michigan Agricultural Experiment Station.

Michigan State University has been advancing knowledge and transforming lives through innovative teaching, research and outreach for more than 150 years. MSU is known internationally as a major public university with global reach and extraordinary impact. Its 17 degree-granting colleges attract scholars worldwide who are interested in combining education with practical problem solving.