At the Friday lab meeting, I was told that one colony has become all “laying workers” by a visiting scholar in my lab, so I decided to take some photos the same day. I have seen workers backing into cells before, to lay eggs but at that time I did not have a digital camera (or perhaps even a film camera when that happened, most likely). I spent one hour observing these bees.

I saw almost 9 frames of medium frames all filled with brood, so the colony has been laying for at least 2-3 weeks. What is strange, was that about 20-30% of cells were capped as worker cells (you can tell this by their flat top), so initially I thought there must be a queen. I tried to uncap many cells and all had prepupae inside so I could not tell. The size of larvae seem to suggest workers.  If this is really true then these workers have the “capensis” trait? The cape bee workers are able to produce new queens or workers, even thought they, of course, cannot mate.  Most of our bees cannot do that, but one paper said about 1-2% of virgin-queen laid eggs can become workers or queens.

I also saw a lot of dead brood. Snotty brood? Not quite typical European foulbrood (which die younger and turn yellow in color) and many are dead inside capped cells. A few looked like sacbrood (caused by sacbrood virus).

1. Dead brood were everywhere. But as you can see, all these brood cappings here looked like workers, not drones. 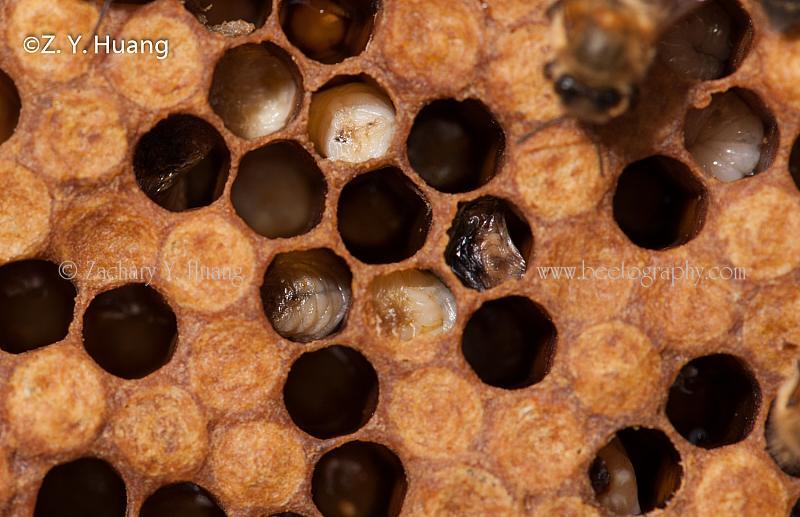 2. Another one. Again hardly any drone cappings. 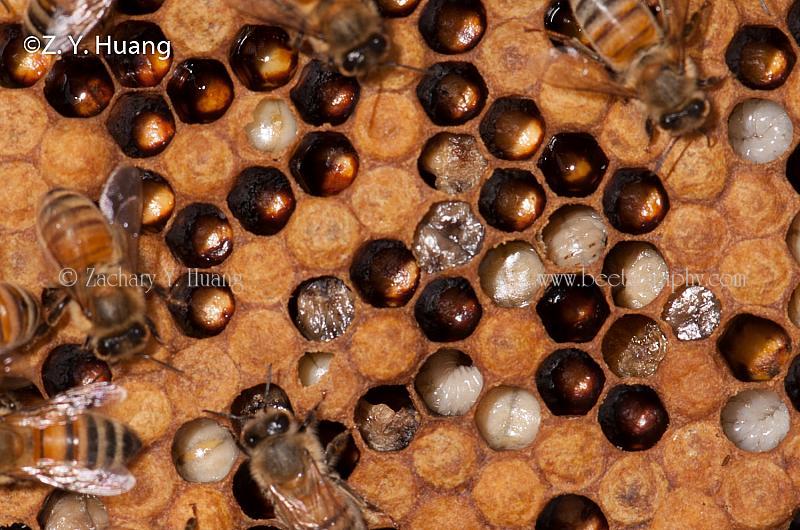 I then kept looking and eventually found multiple eggs per cell, only near some edges (most cells are filled with brood) and also on some newly built burr combs.

3. Multiple eggs per cell at edge of frame: 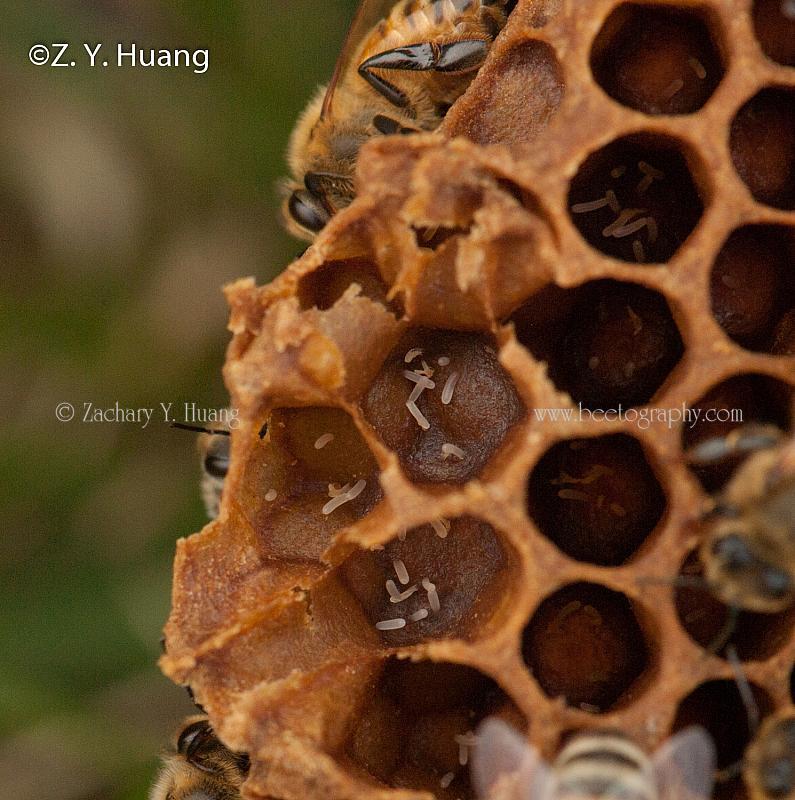 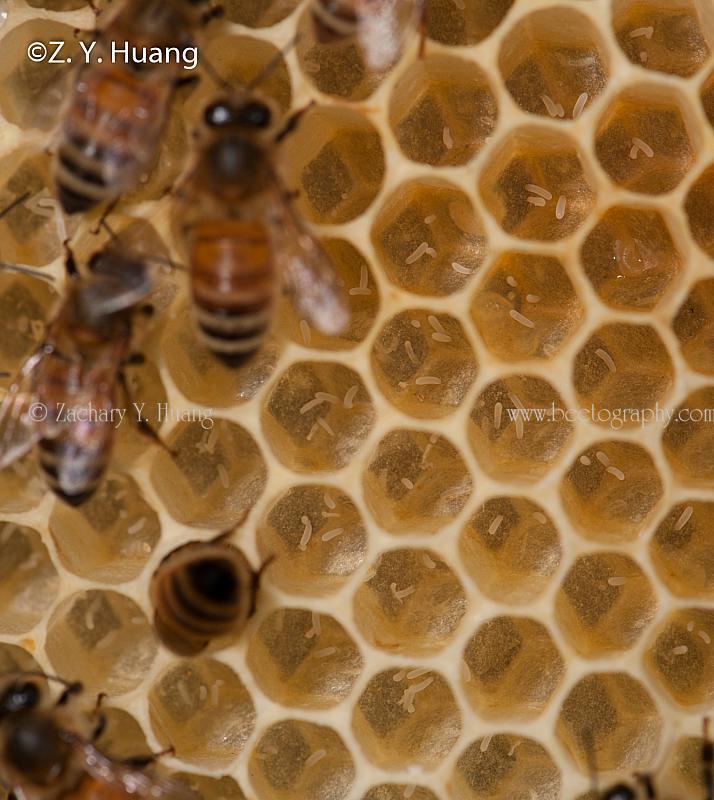 Finally I saw one worker was being treated quite “royally” — she was attended by a circle of workers, as if she is the queen! This typical retinue behavior is usually reserved only for the laying queens — even virgin queens do not elicit this response.  This is due a mix of chemicals: queen mandibular pheromone which has 5 components.  I saw the worker repeated inspected cells and looked like she was backing into cells to lay eggs!  The laying is not very typical because I was expecting her to back in further (due to her short abdomen) and thus only really the head would be outside of the cell. But now I looked at the photos and it seems she must be laying eggs.  These workers are called “false queens” or pseudo-queens. Not all laying workers are false queens, but I imagine all false queens must be laying workers? I was going to sample her but she went to the other side of frame (I did not have tube with me) and then I could no longer find her — I thought I have known her after staring at her for at least 20 minutes and taking photos of her.

I googled for this sort images and did not get any. I am sure I have seen at least one laying worker and one false queen before, either in books or scientific papers.

5. A nice circle of retinue workers around another worker! 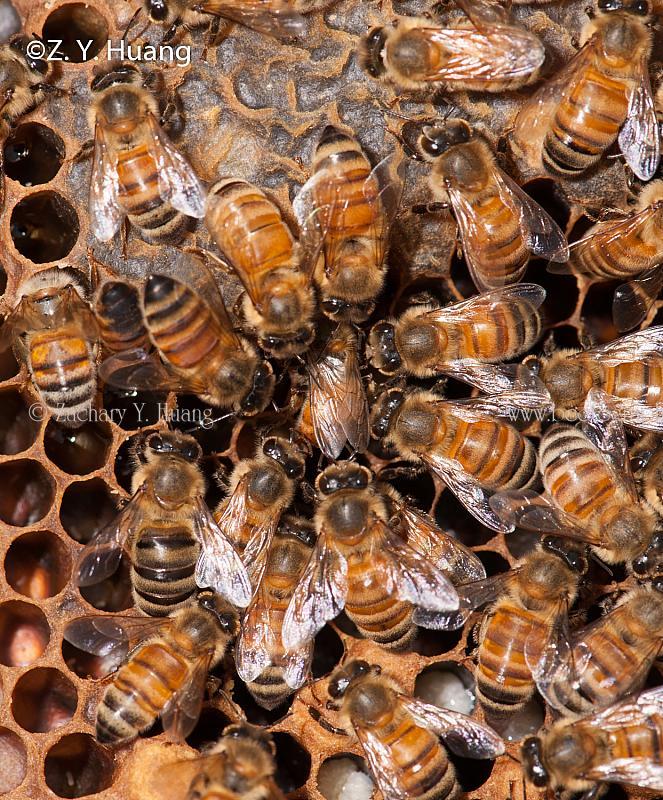 6. This photo definitely looked like the worker was laying eggs (part of her abdomen was inside a cell). 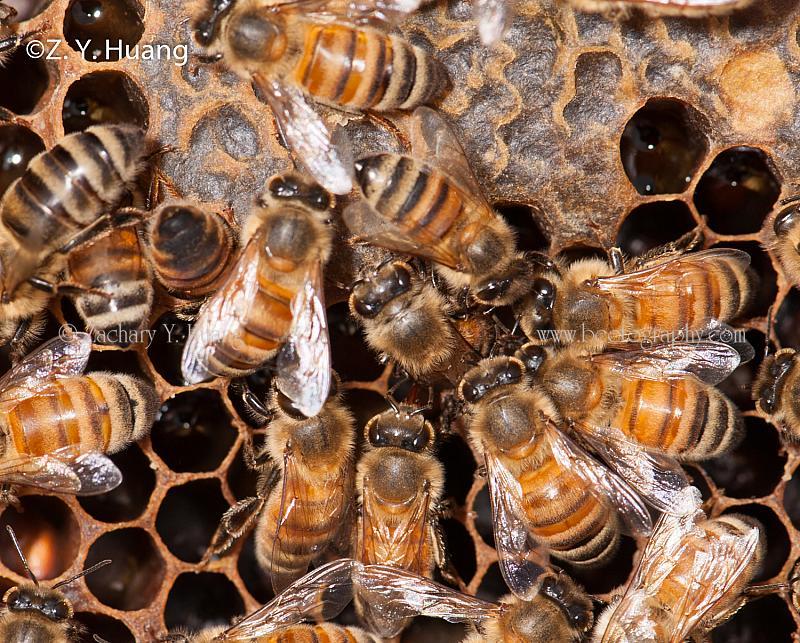