I was in Bangladesh for 2 weeks Oct 10 to Oct 23rd, 2012 for a trip to help with their beekeeping industry. This trip was funded by WinRock International.  Over there I visited seven apiaries of Proshika, a NGO that helps poor people and they have a beekeeping project.

Here are some photos as a highlight. I will detail the trip (perhaps day by day) later when having time.

People are very poor — on the plane I read in the news that the minimum wage there was 37 USD per month. Indeed, a cup of tea in the street cost 5 taka, about 1/16 of a USD. But they are very nice and friendly. Food was spicy and suited me great. Lots of rice though for every meal. They have introduced Apis mellifera, but also have two endemic species: A. cerana and A. dorsata.

1. A country with history:  Lalbagh Fort in Dhaka, built in 1678. The fist day upon arriving at Dhaka (capital city), my hosts took me to pay a visit to this place. I found giant honey bees foraging on the two bushes in front of this old building (see #5). 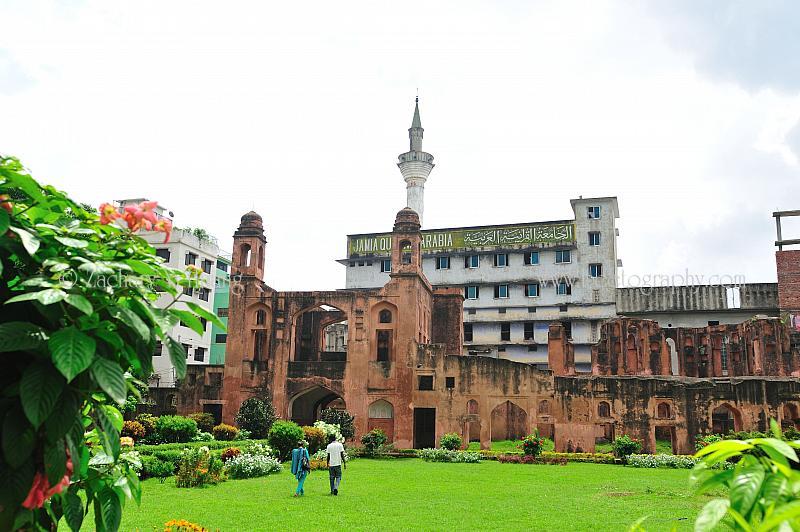 2. Feeding bees with sugar water using bottles and bamboo sticks.  It was a dearth period I was visiting and bees have to be fed both sugar and protein. 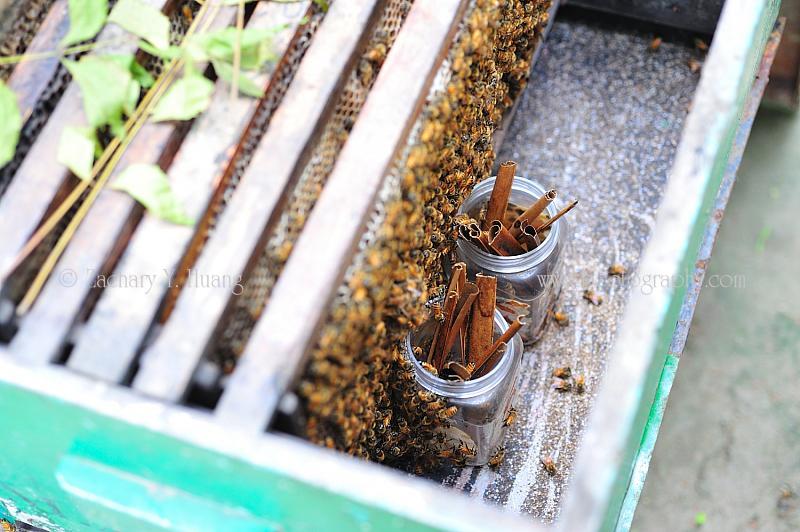 3. A Western honey bee (Apis mellifera) drinking water on a feeder, which is a small pot with floating plants. 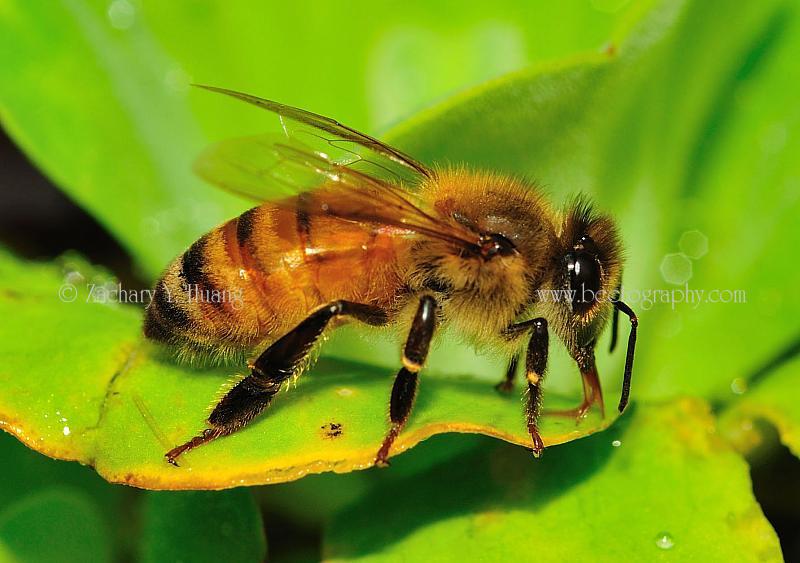 4. Learning sugar dusting to detect Varroa destructor mites. I was told they did not have varroa mite only Tropilaeleps. I had to show that they were wrong… 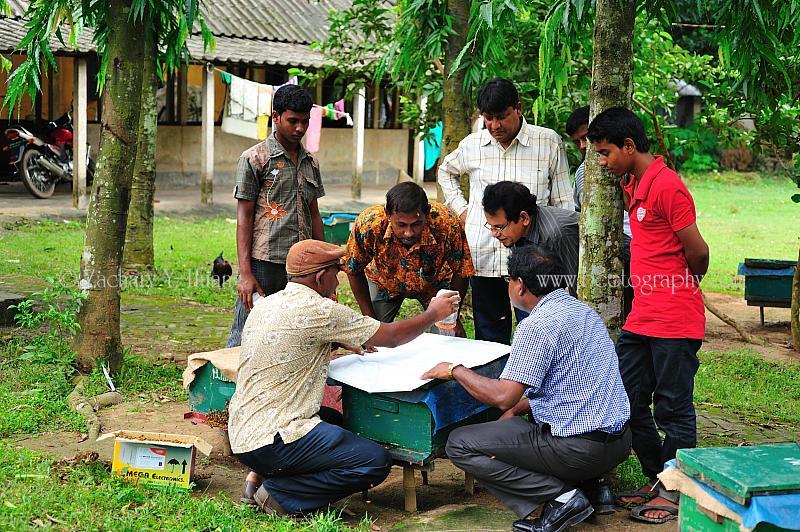 5. Apis dorsata foraging on a flower I do not recognize…I saw the same plant in Malaysia by the road side. 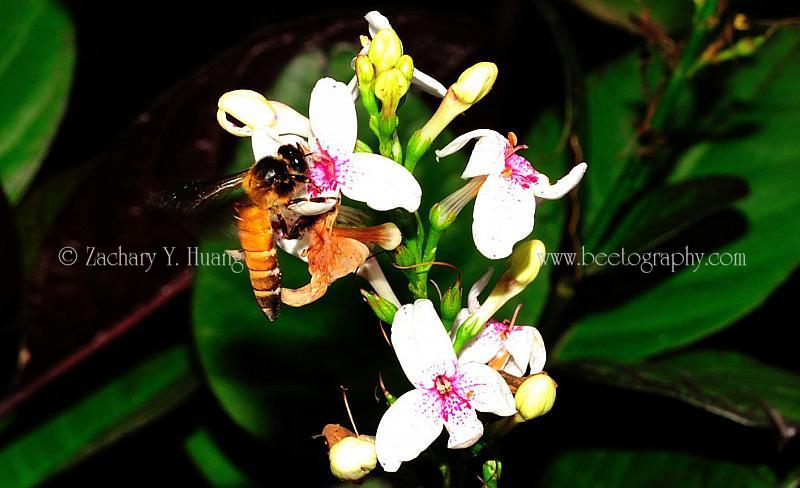 6. Apis dorsata foraging on a type of mint, right in the courtyard of the Proshika Compound where I stayed. She was there every morning around 6-9 am. 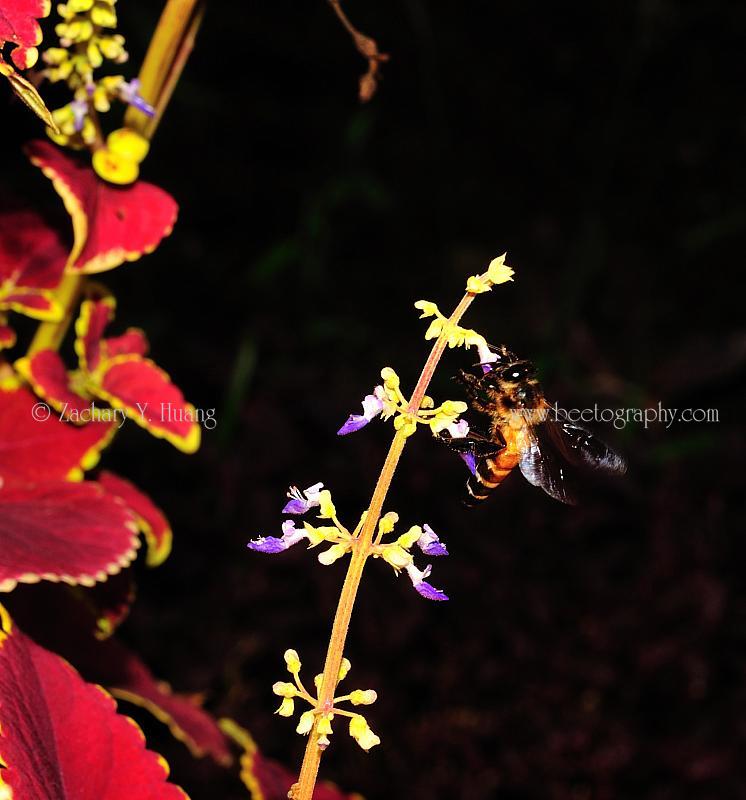 7. A young woman mending what seems a bamboo mat. 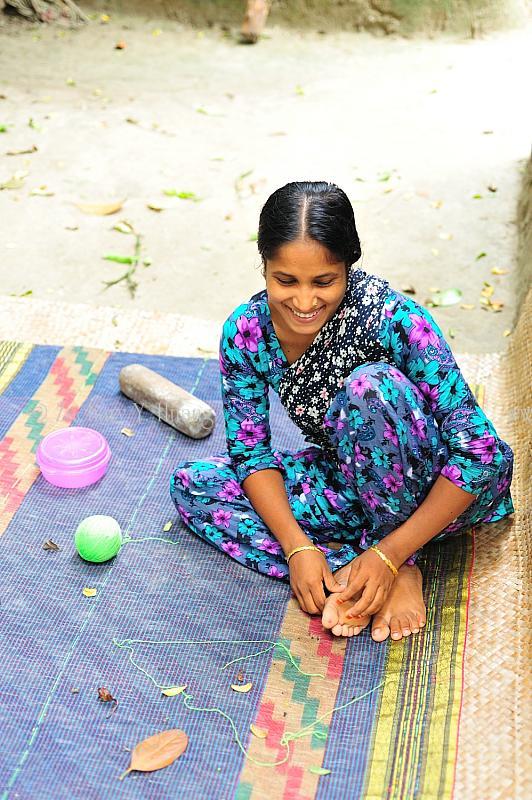 8.  Two men smiling in the market. 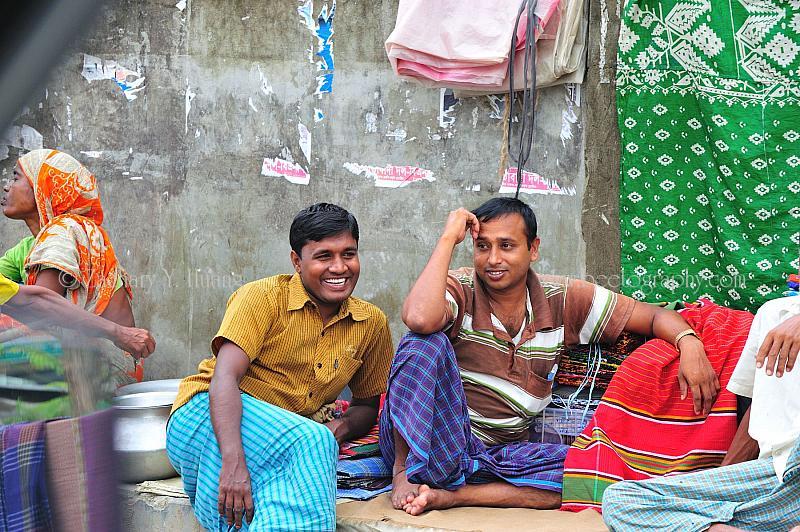 8.  Women and children by the roadside — perhaps waiting for a bus. 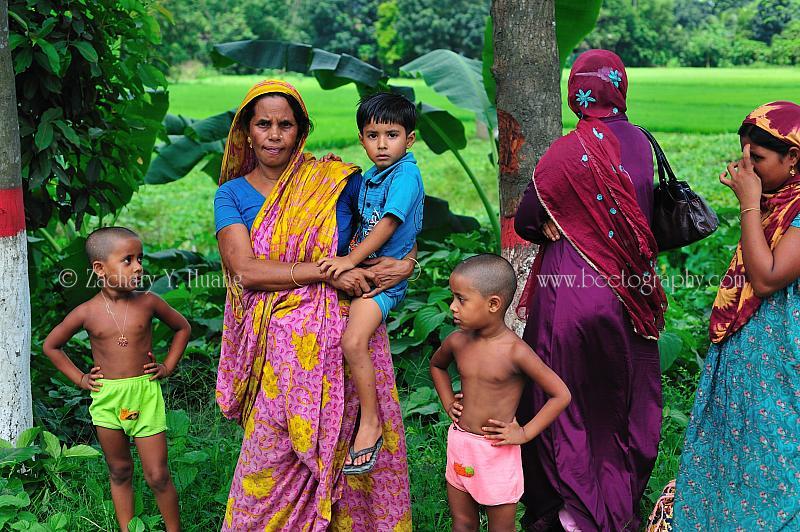 9. Two or three families asked me to take a photo of them. 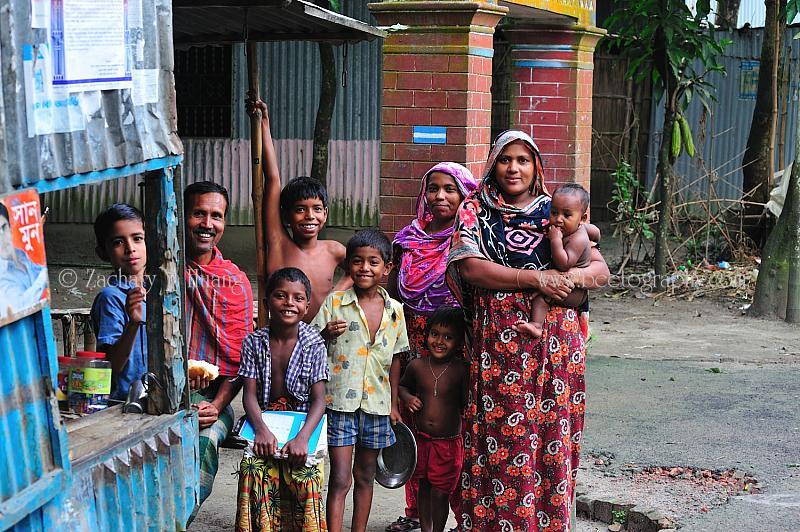 10. Two girls on their way to school in the morning. 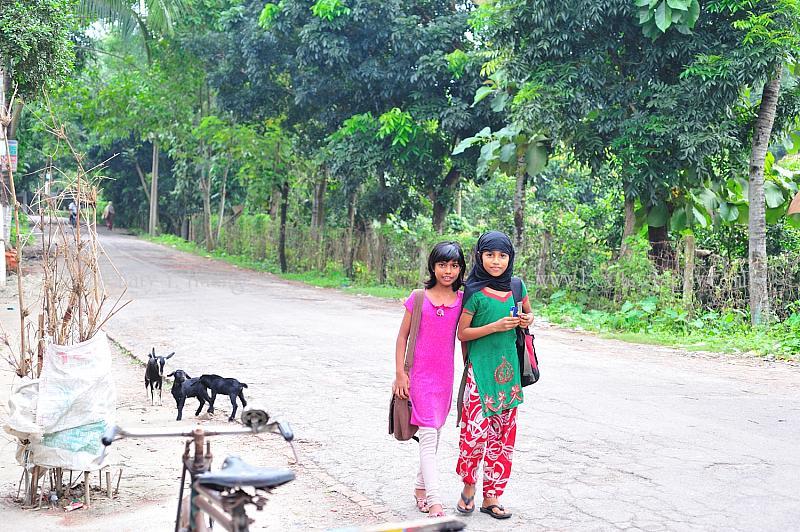 11. Three girls playing together…they saw me taking photos of them while we were sitting inside eating a lunch. 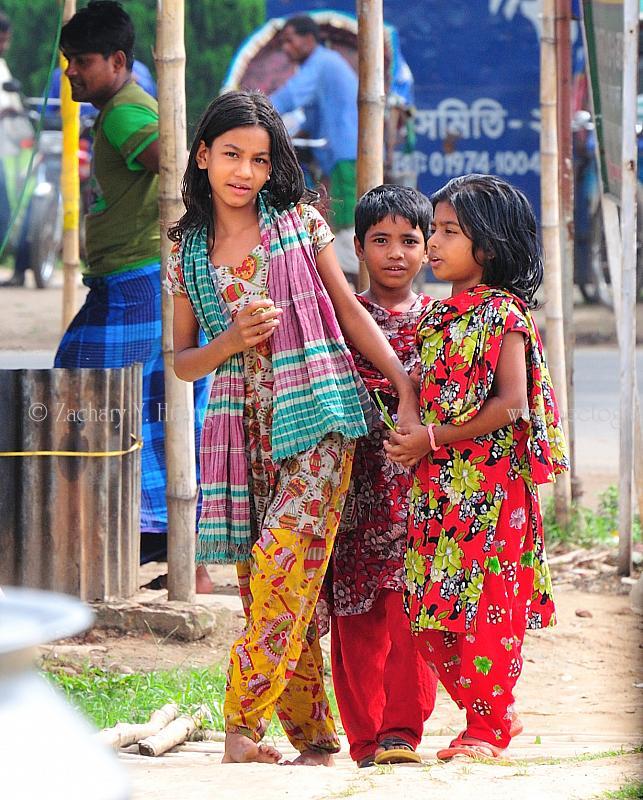 12. Cows in a truck. Most trucks and buses were decorated colorfully, just like rickshaws. 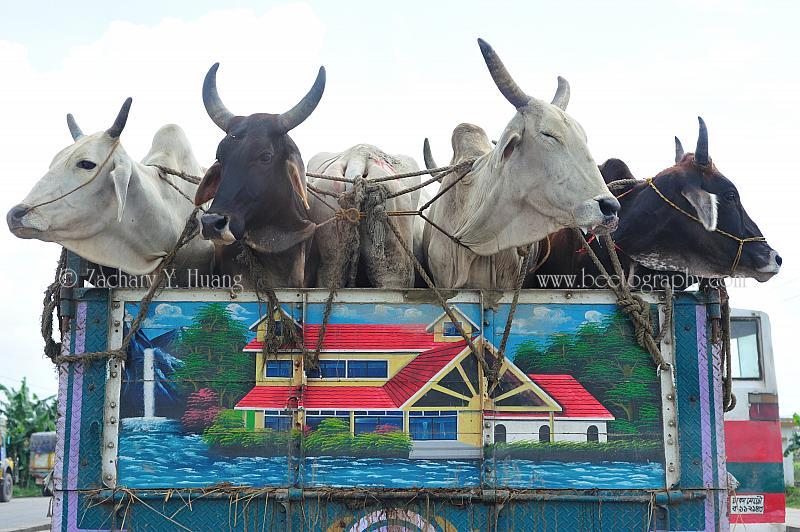 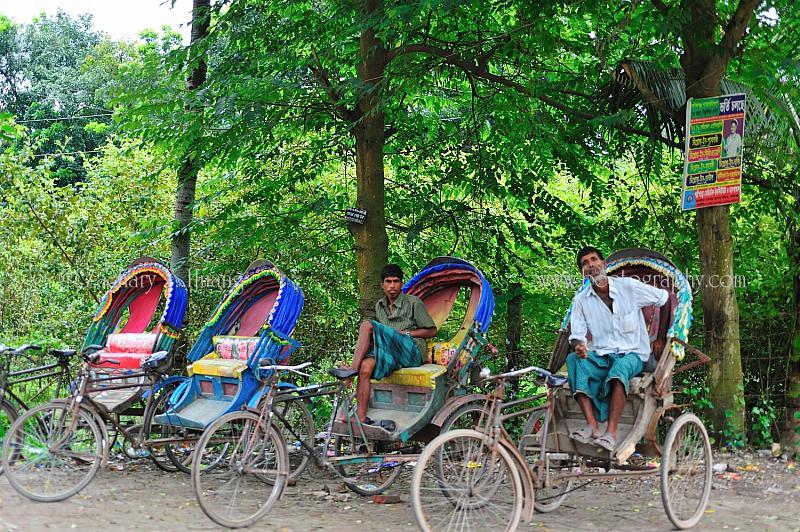 14. Roads are in bad conditions there. 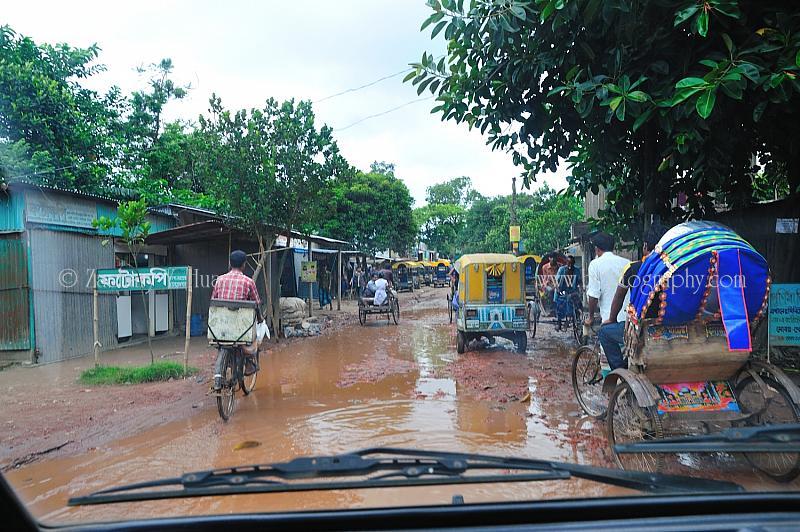 15. That day I rode a car for 8.5 hours to cover about 350 km (about 200 miles), we got stuck here. Two farmers came and helped pushing us out but declined to get a tip initially. Eventually each of them took 20 taka. 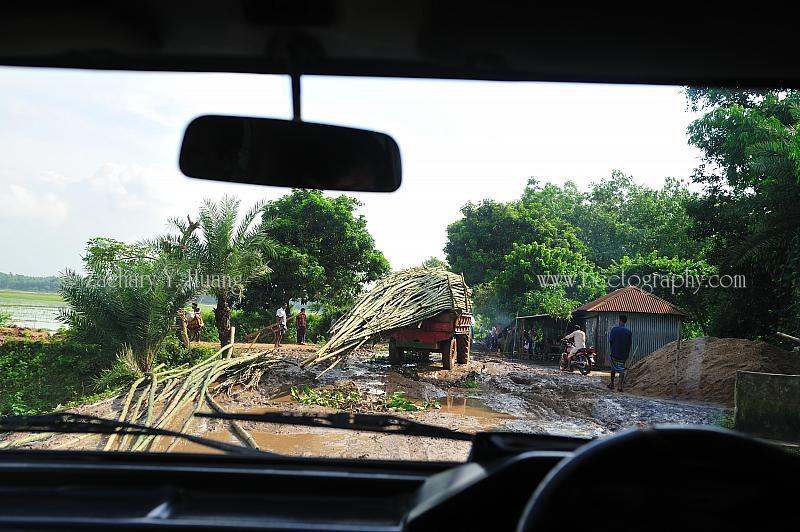