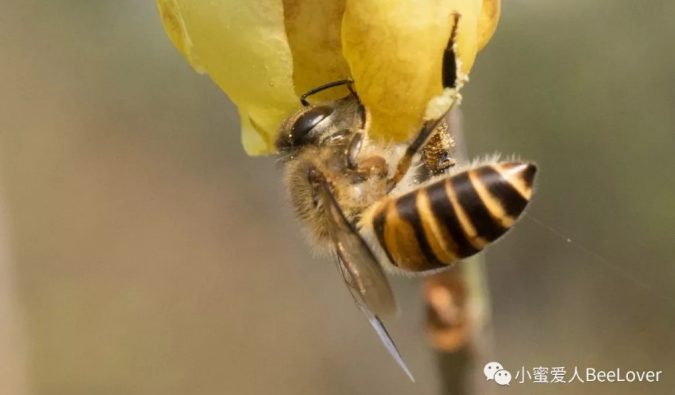 I haven’t returned to China to celebrate New Year for more than 20 years, but I went back in 2018 and 2019 to spend the Chinese New Year with mother.  The Hunan province had been around 8 ℃. On February 6th, the second day of the new year, the temperature suddenly rose to about 22 ℃. I immediately contact the classmate of my primary school, Zhang Tieniu, and asked him to give me a ride to any place with bee plants.  Because I saw someone photographed bees foraging on Chinese plums a few days earlier, I asked him if there were Chines plums in Hunan. He said that there was a tree near Chayuan (a place literally translated as tea garden). Immediately，he promised to take me there in the afternoon. This time I brought Sony A7ii (full frame mirrorless) and a 50mm macro. The newer 90mm is heavier, which I did not bring, neither did I bring the wireless flashes.  Most photos that day were bees foraging on Chinese plums but I managed to get a few shots on the wintersweet, which passed its peak (I would say I was 2 week late).

The wintersweet blooms from December to March, so there should not be many opportunities to see Apis mellifera on the wintersweet. Looking  at the photos. The bees are also collecting honey, but they should not receive commercial honey. The bees also have pollen. I gave a 4/10 point for the ZBAS (Zach’s bee attraction score).

Chinese wintersweet can be used as medicine and flowers can be dried to make a  tea, but the to avoid poisoning the tea should be drank with moderation.

There are many ancient poems about wintersweet, here is one

To sing Bai Xue’s words is difficult to reconcile,
Try to ban Youxiang force is still banned.
Waiting for the beautiful name, Wumei is so golden.

here is my try:

I want to praise the snow but hard to come up with a poem
I admire the faint fragrance but words are lost in cold
If you have such untainted fame
Why would you, my dear wintersweet,
Adopt a color of gold?

1. The following four photos are photographed with the camera handheld. It can be easily seen that this is a Apis cerana, because the dark and light colors of the abdomen are very contrasty.  But the light color is actually yellow. This bee should be (trying) collecting honey but has some pollen also. 3. Still this bee, she flew up. There are many small flies on the flowers. 4. Finally, I was about to leave. But another came (she had larger pollen loads). Without my flash I was limited by the light. This one was shot in high ISO, so you can see that the graininess shows up. 5. She desperately went into the flowers to collect nectar. It seems that honey collection might be the main task because there was not much pollen on any bees. 6. This one can see her tongue licking nectar. 7. This photo shows her licking nectar inside the petal. Did the last bee make a mistake by licking the outside?