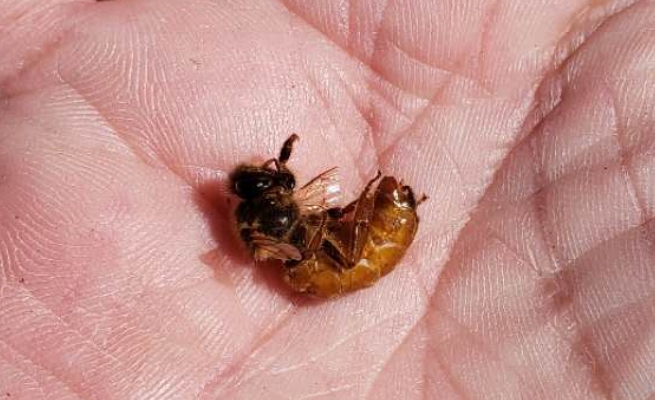 I was doing beekeeping yesterday. Found one queen in a weak colony but she had 2 solid frames of brood. I grabbed her, cut her wings off (to prevent future swarming, which actually will not happen this year!), then was going to put her at some place and then open the paint bottle (which required two hands). It was at this time I realized that she did not move (I could see some shaking of legs, but she looked like a goner!). I could not believe this was happening, because this never happened to me before!
1. Did she sting herself and killed herself? Sometimes (workers more easily) bees got angry, bents their abdomen too much,and can sting her own mouth parts. But usually I try not to let his happen (donot give her the chance to do this).
2. Was she killed by the Bugsoff (Deet) on my hands? I sprayed some onto my arms and used one hand to wipe them off (more likely my right hand to wipe the left arm).
3. Was she faking death?
Possibility 3 was slim but it was in my mind, that is why I still painted her anyway. I then put her on top of a frame, and put the inner cover on. Sometime later I opened it and saw that she was gone. I thought she was dragged away by the workers.

So today I had an extra queen (to start queen rearing for one experiment) and was going to put her to that colony (yes, I marked that colony with a brick on a different direction). I opened the colony, no emergency cells. Then looked at the upper (medium) super, and she was there! I knew it was her because she had wings cut and was marked yellow.

So, what happened? I think the queen for some reason “fainted” in my hand…then she woke up and now is performing normally. How could this happen? Did this ever happen to you?

OK, I do have photos to prove my point.