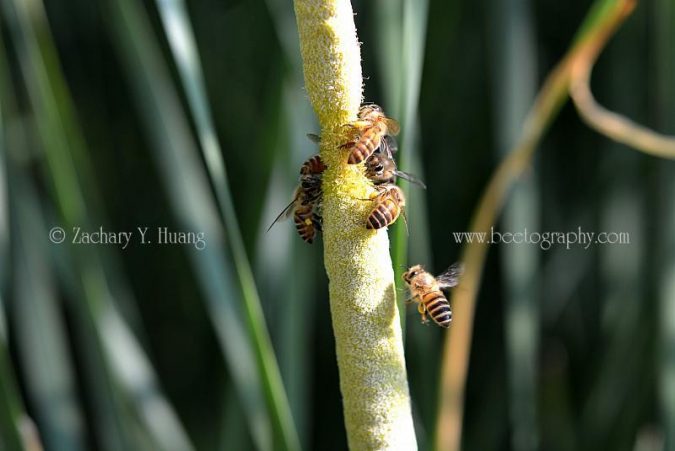 I have spent about 1.5 hours this year to answer this question, the answer was “no”, only to be refuted by bees in China. I therefore wonder: if a longevity test should be done on the Chinese bees?

The reason that I wonder about this plant is that I know it produces a lot of pollen. In fact you can buy it like $5 per lb from the Net, to make pancakes. (We made 2 small cakes today and it is sweet!)

So without reading the papers first (see below), I was jogging and found a small patch on Dobie Rd (again) in Okemos (MI). I checked one and it was shedding pollen! For many years I wondered about the plant but never could encounter one patch which would be blooming. One may google it, then forgets about it, as I know it is probably not on the top of the list for the bees (therefore neither for me).

So the next day, June 22, at 8:30 am I arrived there without breakfast (I thought maybe the bees will forage early in the morning, like on corn, which I saw bees foraging like 6-7 am). Patiently I scanned each cattails swaying in the gentle breezes of a summer day (I almost want to say anything blooms after June 1st should be summer flowers, but officially summer starts June 20). I am sure drivers in cars passing by will wonder what I was doing there staring at some tall grass. For that one hour I was there (not including the 20 min I spent on the road for a round trip), I saw about 10 syrphid flies (and at least two couples making out), 3-4 leaf beetles, and 1 green bee (Agapostemon, Halictidae)! I saw one resting on a leaf first, and it took off. Then after 20 min I saw one again on the “flower”. so I got two pics of her. And a few snails some on leaves and at least one on the “flower”, perhaps eating pollen.

After I came back I tried to read about the pollen, Justin Schmidt, the guy who came up with the Schmidt sting pain index and author of “the Sting of the Wild”, actually studied the cattail pollen. In one paper (which I should have remembered, because I have read it, but it did not ring the bell because he used “Typha”), he compared Typha pollen with other pollen. I then downloaded another paper which only studied Typha pollen. Here is the abstract:

Typha latifolia (Typhaceae) is a wind-pollinated plant that produces large quantities of pollen containing 14·5% starch and 17·0% protein. This starchy pollen, when fed to newly emerged adult honeybees, was nearly totally rejected when they were provided, simultaneously, with a standard mixture of bee-collected pollen from 15 other plant species. Ethyl acetate extracts from 1 g of Typha pollen were added to 20 g of an artificial diet and fed in choice tests to newly emerged worker bees. The bees preferred hy over 2·5 to 1 the extract-flavoured diet over either unflavoured diet or Typha pollen, itself. In longevity tests, bees fed Typha pollen died, on average, in about 21 days compared with 25 days for sucrose-water controls, and 57 days for bees fed the standard pollen mixture. A small colony fed only Typha pollen consumed pollen rapidly at first but then consumption decreased and in 5 weeks the population declined from 5686 to 2525 adults, with only 377 new adult bees being reared. A similar colony fed a pollen mixture increased from 4024 to 4617 adults in 4 weeks and reared 2269 adults. Despite the poor colony performance on Typha pollen, the bees apparently digested the pollen as shown by an average approximate digestibility (AD) of 90·0% and average coefficient of approximate digestibility of nitrogen (CADN) of 83·6%. The amount of uric acid in faeces from Typha-fed bees was 13·1% of the total faecal nitrogen. These results suggest that Typha pollen may be toxic to bees and is avoided by them, although it is digestible. The nature of the presumed toxic activity of Typha pollen is not known but may be related to its high starch content. Overall, Typha pollen is detrimental for honeybees and would not be a good supplemental pollen for feeding to bees. However, it does contain lipid-soluble phagostimulants that can be separated from the otherwise unattractive pollen.

I went back in the afternoon around 2 pm to see if bees would visit at a different time and harvested about 8 flowers. I got about 25 grams of pollen (still a lot!) but gave up for 1 lb (it would take me 3 hours and there were not enough flowers there in the small patch).

I posted my observation in two Wechat groups (nearly all Chinese beekeepers) and one friend said he has photos! He sent me two of them, both with A. cerana foraging quite madly on this plant (not sure of the species but for sure a Typha). Dr. Xinjian Xu, who was also the main driver for me to get bees foraging on Catalpa leaves, took these photos.

So the question now is: should one study if the cerana bees gain any benefit (i.e. longer life than sugar only) from the starch rich pollen of this plant? It is toxic to our bees.

1. This photo shows that it is T. latifolia, because of the separation of the male (top) and female (bottom) flowers. You can see the pollen (yellow) on the surface of the top one. 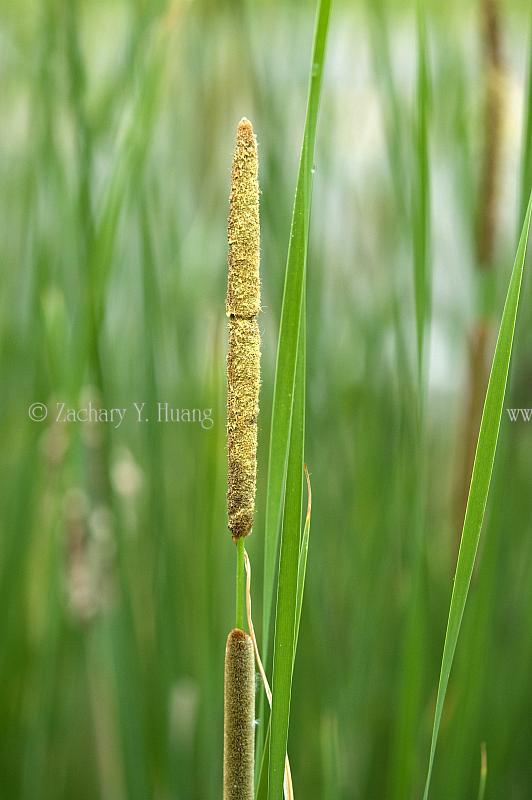 2. This is how much pollen from one single flower.  I ate most of it with no bad consequences — I would have died if this was ragweed pollen! I used to react to corn pollen too, now not so bad. 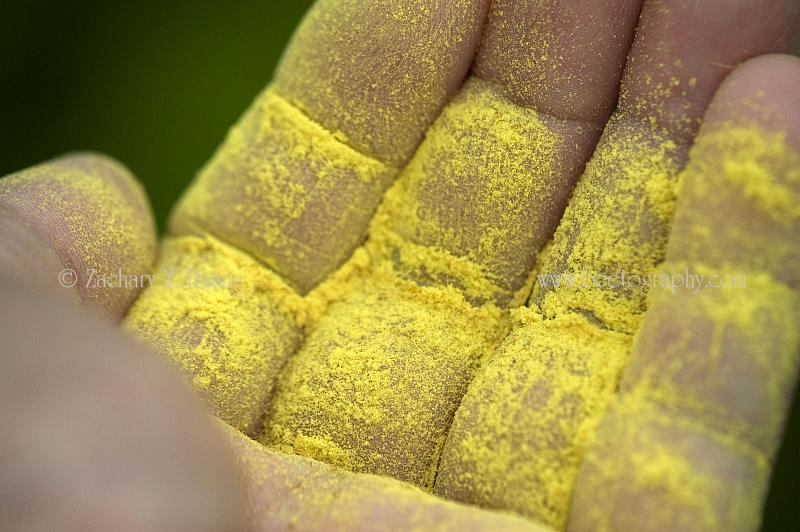 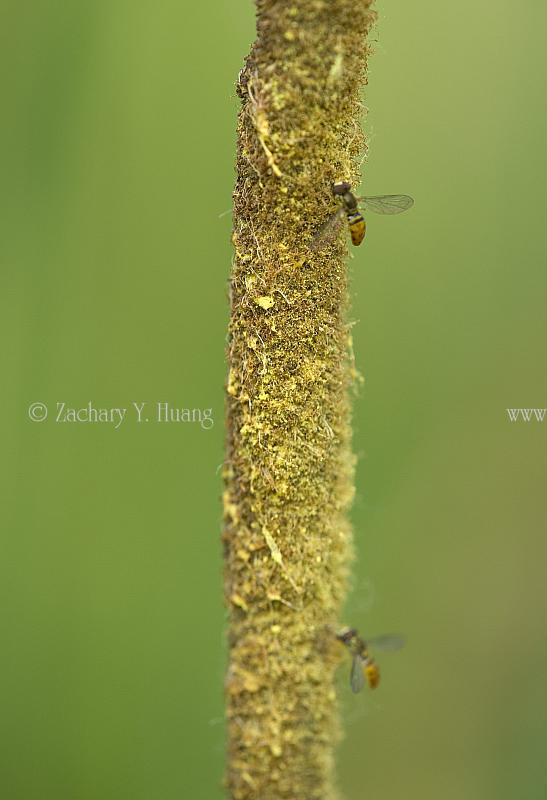 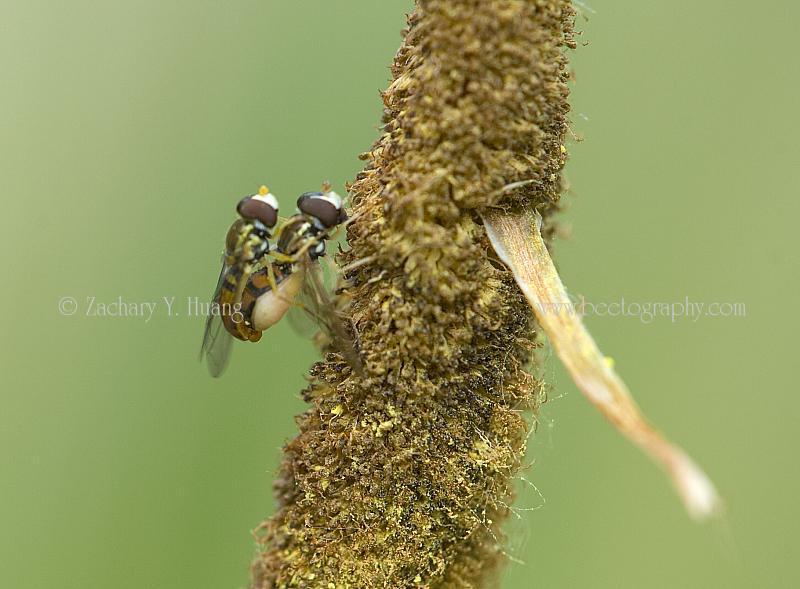 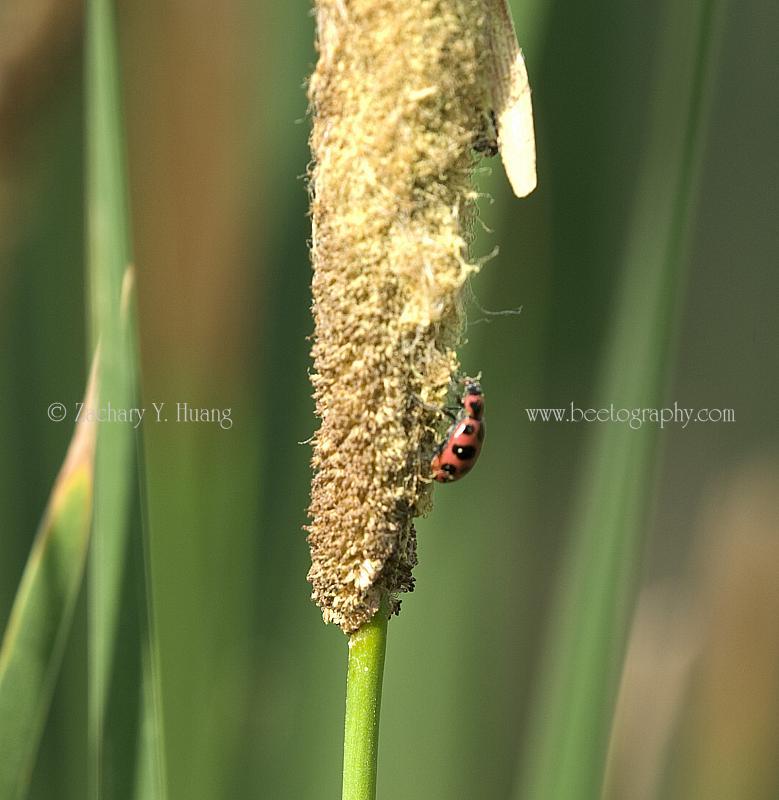 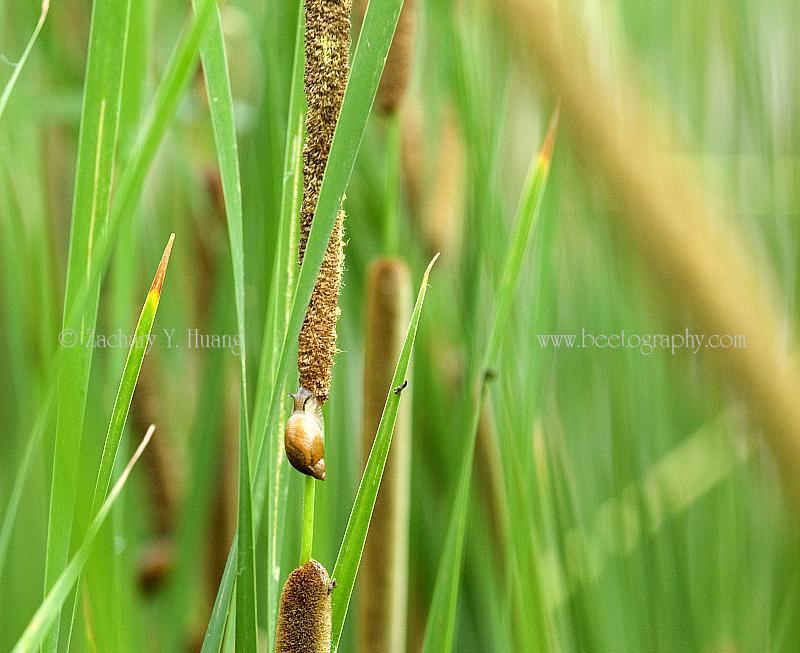 7. Finally I have proof that bees do forage for its pollen.  This is a sweat bee (Agapostemon). These bees are in the family Halictidae, so named because sometimes they land on your arm feeding on the sweat (salt seeking?). Schmidt cites another paper saying that a different species of the same family, also a sweat bee, can complete its development by feeding on this pollen, in the lab. 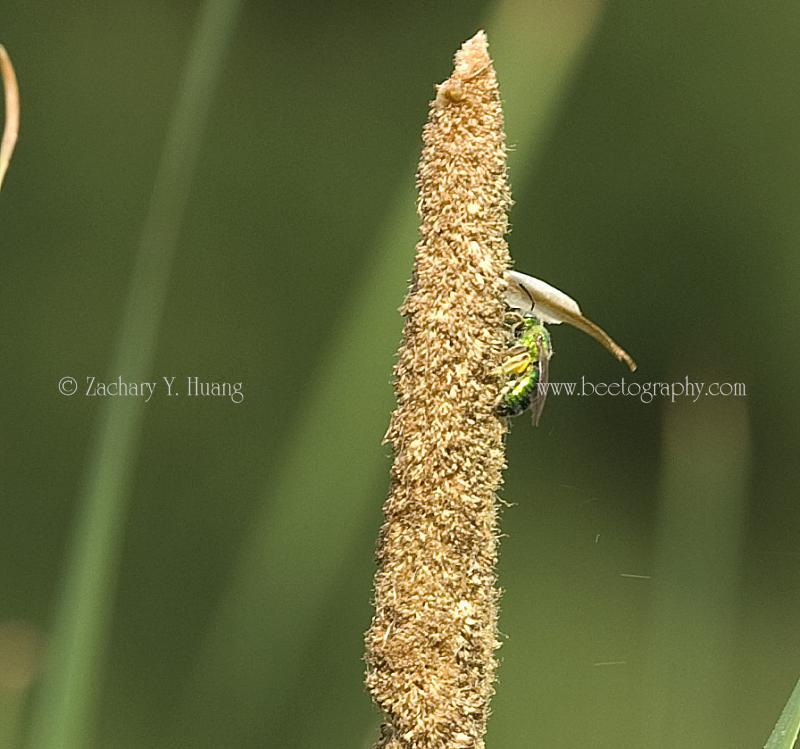 8. So Dr. Schmidt published the study without seeing any bees foraging on this plant. Actually he thinks our honey bees avoid this plant. But, the Asian honey bees (Apis cerana), apparently has a different opinion of this plant! I counted 6 bees! Photo by Dr. Xinjian Xu, May 16, 2016, Fujian, China. 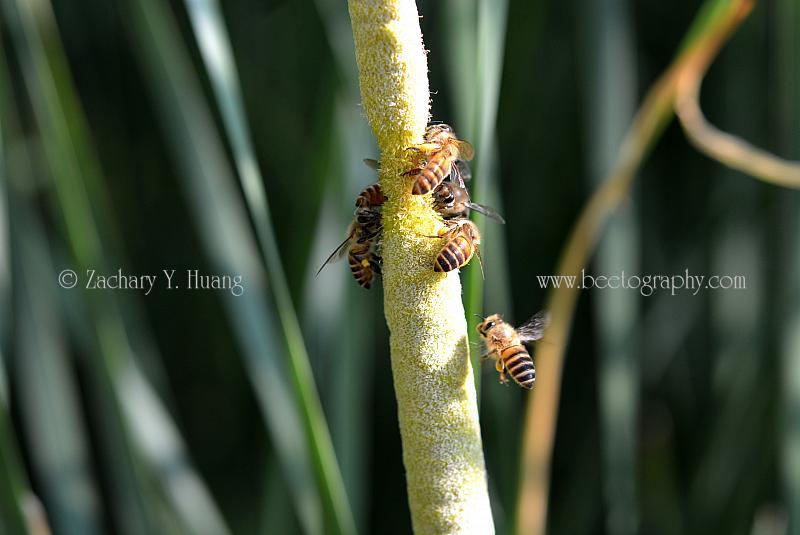 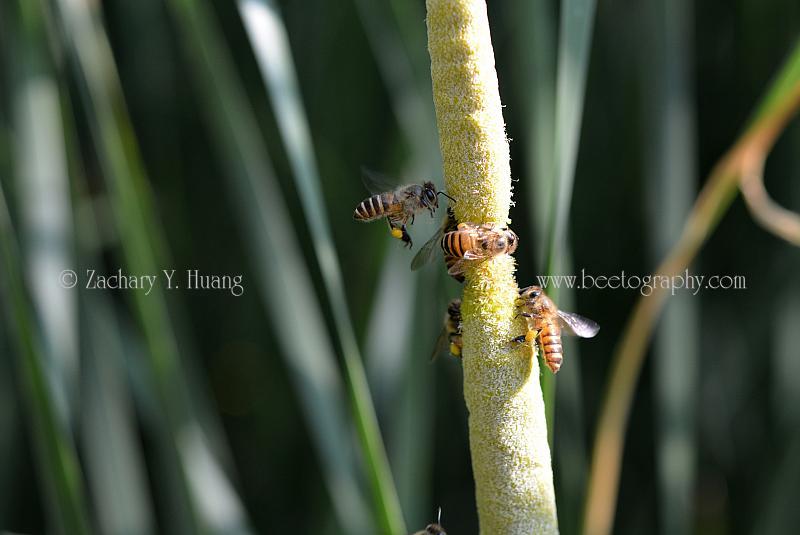 ZBAS* = Zach’s Bee Attraction Index. I gave it a 0.5, not 0, because there is a good possibility one might see our bees working on it too. Right now I did not see it because it has to compete with many flowers that are blooming (birds’ foot trefoil, white clover, privet, sumac, to name a few).