I noticed that the catalpa trees have been blooming in Okemos for a few days. I took a few more pictures 3 days ago, but saw no bees on them.  I checked my huge library of bee photos and found a few more photos related to catalpa and bees.

1. My first shooting of this flower was actually quite early, it turns out. May 9, 2002 I saw bees foraging on it in Beijing.  It might be a different species there (notice the flowers are of different colors from the Okemos photos).  Again, this was before I had the Nikon D70, which was bought in 2004. 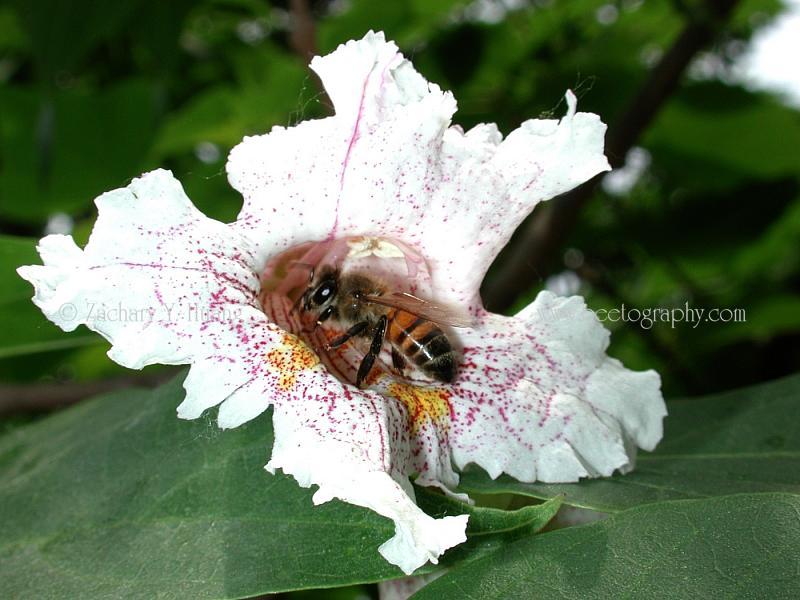 2. She went all the way inside, probably to gather nectar. 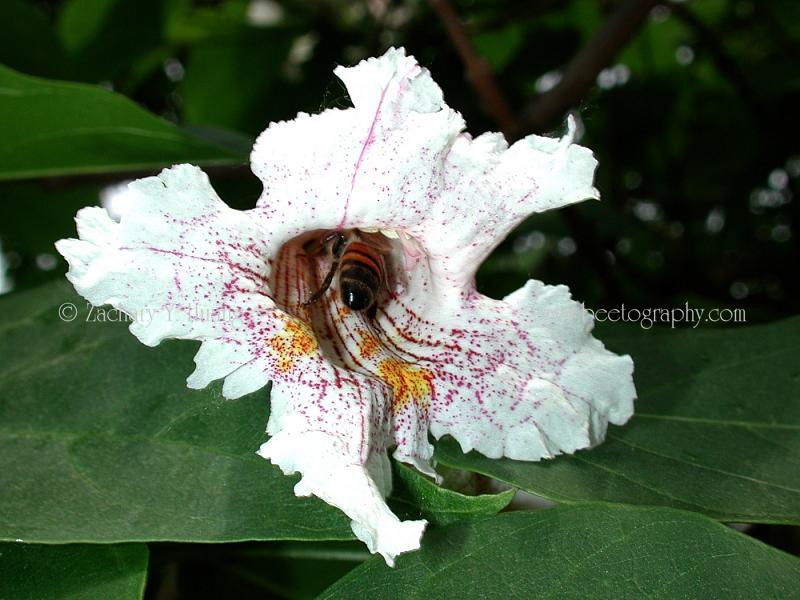 3. Another shot. a bit overexposed. 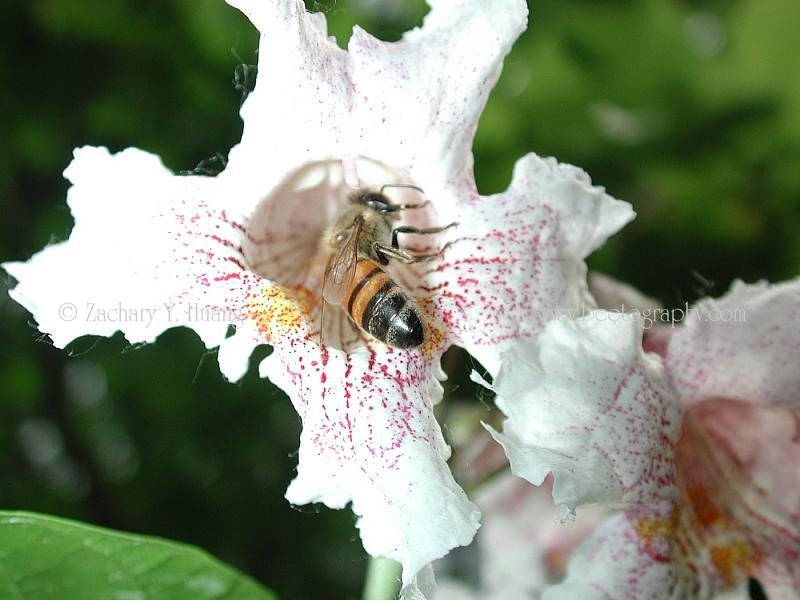 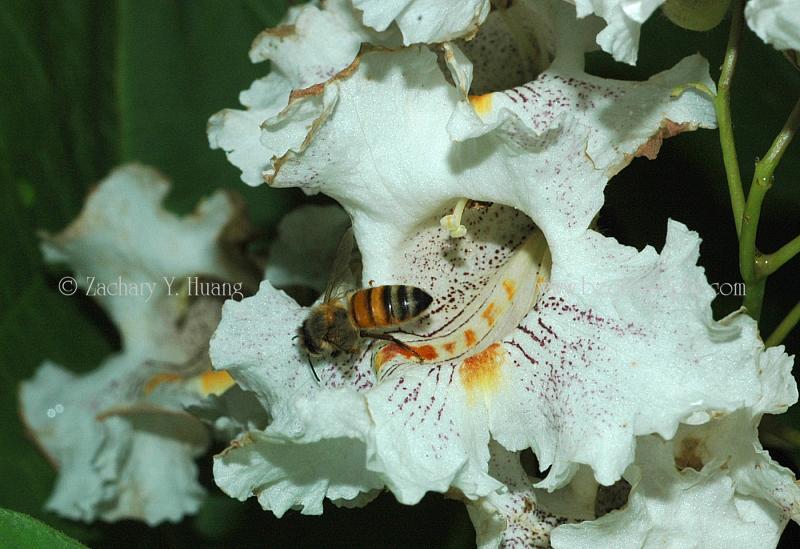 5. She also went inside… 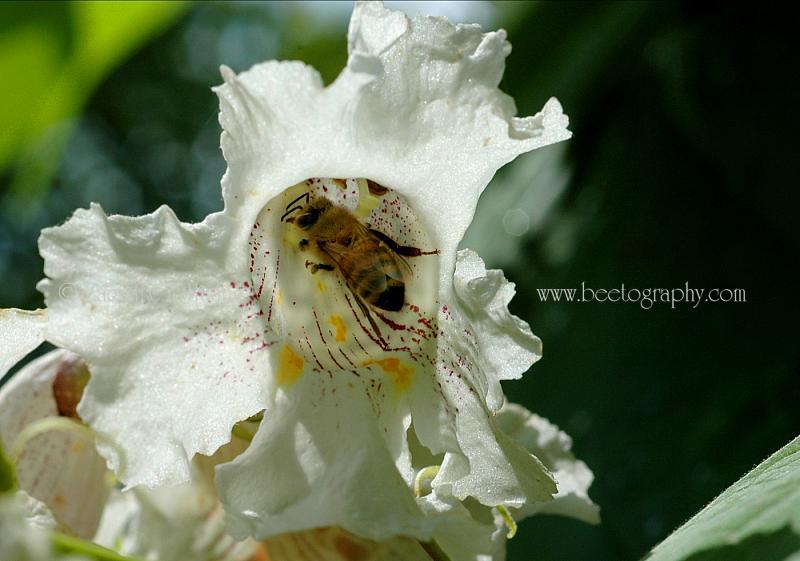 Then I read that catalpa should have extrafloral nectaries which produces nectar. I did see spots on the underside of leaves with mold on that, suggesting sugary liquid was there. I kept checking to see bees for many years. But perhaps at the wrong time or at the wrong tree :)

On Sunday June 26, 2016, I finally had the luck to see honey bees foraging on the back of catalpa leaves. I was going to give up after waiting for 10 min on the blooming tree, but decided to walk to the other tree (finished bloom about one week ago). Then I saw one honey bee foraging! I started shooting the bee (with my camera, of course) and another bee showed up. I went back to the blooming tree (30 ft away) and saw another 2 bees. So there were at least 4-5 honey bees foraging on the catalpa leaves, from 9:15-10 am Sunday morning…

Now, I finally have photos to prove this! (after visiting 6 trees and at least 10 trips!). Will try to keep an eye how long honey bees will forage on the plant. My friend in Canada said he saw more honey bees in July. One paper described nectar production by the leaves and said production peaked in July in Georgia. Apparently trees benefit by attracting ants to the leaves, who in turn would protect the trees from caterpillars (the catalpa worms are good fishing bait, I was told, but I have not seen them yet).

6. A honey bee foraging on the underside of a catalpa leave (Catalpa speciosa, Bignoniaceae). I can see about 6 extrafloral nectaries on this leaf. The bee is on the 5th one, counting form the top. The nectar would lighten up the leave. 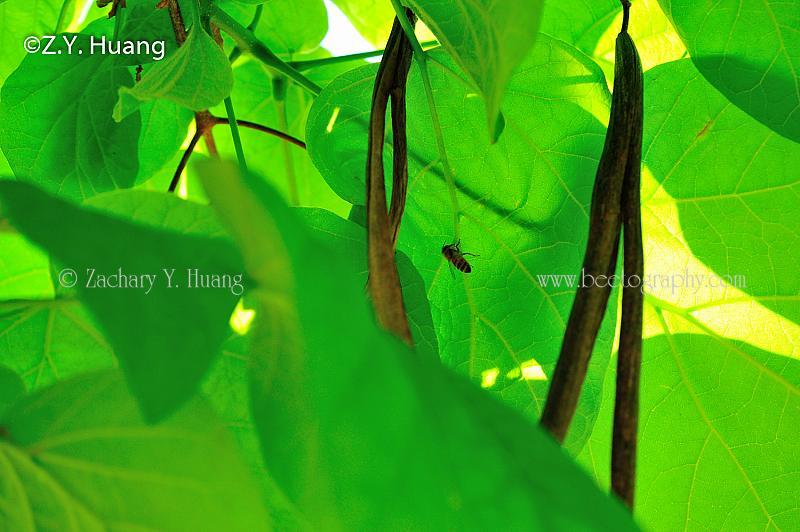 7. But it can be tricky to count. For the above one I only counted one per main branch (except the basal one, there are always 2). But you can see where the glands are by their slightly different color here, the bee is stepping on one (under the left wing), so there also two here. The one at the lower location only had one on the left. 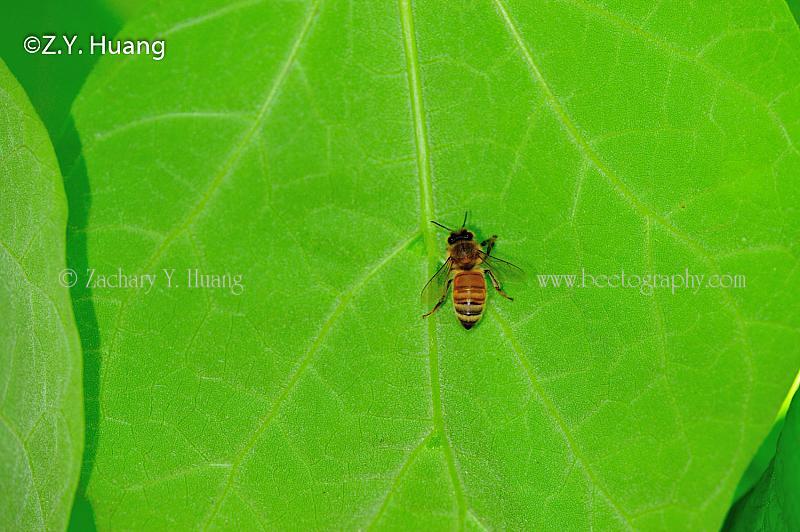 8. A honey bee licking nectar off the extrafloral nectary on the left side. You can see a wet spot on the right side also. 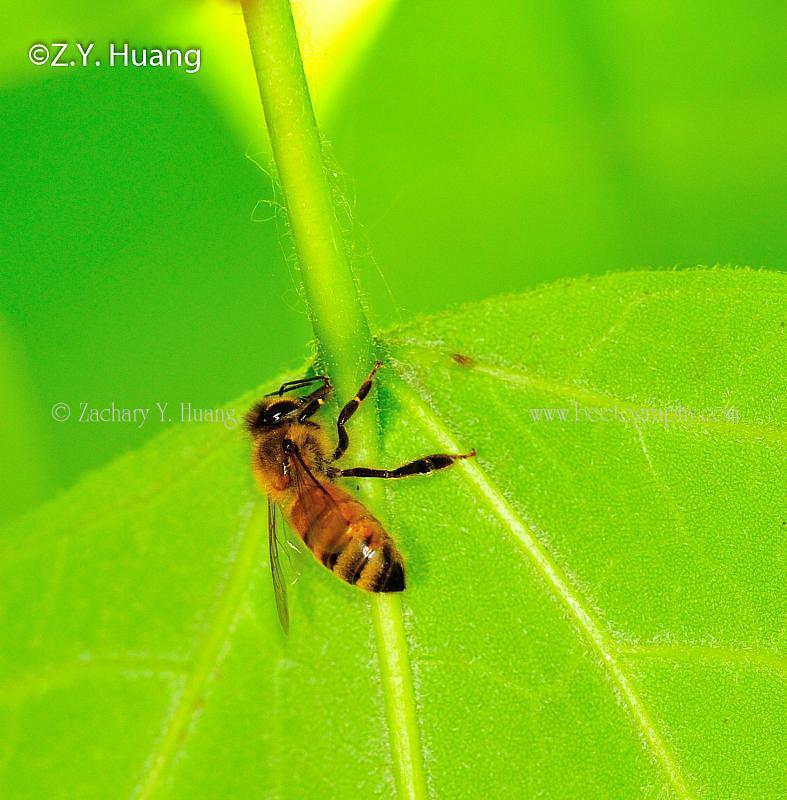 Other plants with extrafloral nectaries: cotton, cherry (all cherries have 2 glands at the base of each leave, this is how I differentiate a cherry tree from a peach or plum), Roselle (Hibiscus sabdariffa) (I have photos of bees foraging on them).