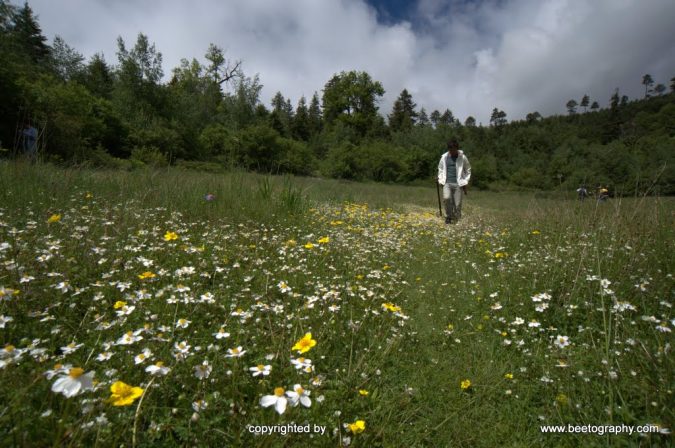 Alpine flowers, Part I.
I was at the Shangri-La Alpine Botanic Garden for 11 days in June. Shangri-La is about 4 hrs of drive, north of Lijiang, in Yunnan Province. But one can fly from Kunming to there in about 40 min. The garden is the first and only privately owned botanic garden in China.  The elevation is about 3300 meters (almost exactly at 10,000 ft). We usually climbed about 200-300 to hills to study the plants. With the high altitude, I was stopping to catch my breath every 5-10 minutes. But I learned about many plants there, though I saw very few insects (too early?).  All flowers I photographed were naturally grown there, I believe the garden actually planted only a few species in one area (I believe a peony I took was planted).

Study flowers:
Two students of Prof. Li, my collaborator and host, were studying pollination of flowers in the primrose family Primulaceae. Bumble bees started robbing nectar from both Primula sikkimensis and Primula secundiflora when I was there, but I did not see many bumble bees, although at some sites more than 50% are robbed.

Primula poissonii 海仙报春, blooms later than the above two species, but prettier in color.

A hybrid between P. secundiflora and P. Primula poissonii. Apparently pollinators make mistakes and would transfer pollen across the two species and produce this hybrid. One student did his MSc thesis on the hybridization and also discovered robbing could result with pollination for the plants, contrary to what we expect (robbing usually means the insect bypasses the pollination parts, the plants gain no fitness, but loses nectar)

Nomocharis forrestii, a very pretty lily. A postdoc was there studying the pollination of this flower. There were two types of flowers, complete (with both male and female parts) and some with only male parts (this one, lacking a stigma).

Other plants:
A spruce, Picea brachytyla, Pinaceae. A spruce with cones with a very peculiar color.

桃儿七Sinopodophylum hexandrum. 鬼臼科。A kind of mayapple, in the family Podophyllaceae (some put it in Berberidaceae). A plant with anti-cancer chemicals. A beautiful pink flower.

Orchids:
I saw three species of Lady’s Slippers and 2-3 other species of orchids.  All three are listed as endangered species. A poppy. Meconopsis horridula, Papaveraceae. A beautiful blue color, Picasa software does not quite reproduce its original color.

This one has something happening to the petals, and the petals became more like leaves…this one has half and half.

This one has all petals changed to leave-like.

A patch of flowers can be consisted mostly of these flowers:

Updated Feb 18, 2021 (fixed all links to images by uploading to own site, original links to picasaweb files provided by google were broken).